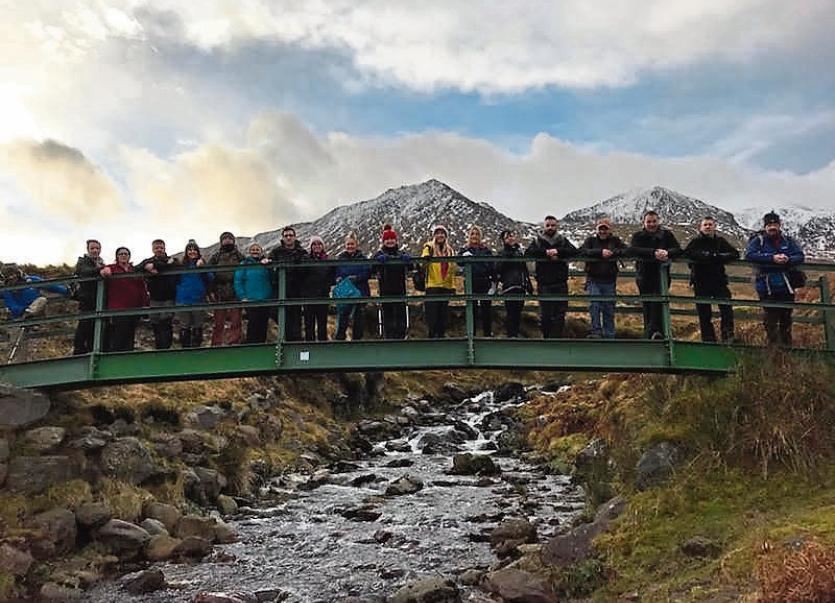 Conroy family members and friends during their climb

A West Limerick family has taken the idea of giving back to heart and raised an extraordinary €22,200 for Milford Care Centre so that it can continue its invaluable work.

The money was raised earlier this year and involved an ascent of Ireland’s highest mountain, Carrauntoohill in Co Kerry.

“Milford Care Centre is, unfortunately, a place well known to the Conroy family, “ Liz Conroy told the Limerick Leader, explaining the background to their big undertaking. Sadly, she added, three family members have died there.

Liz’s parents Bill and Kit both died peacefully at Milford - Bill in 2008 and Kit in August last year just weeks after she received a diagnosis. Josie Meehan, who was married to Liz’s brother, Bill, also died there in 2015.

But familiarity with Milford sparked a huge admiration for the work done at the centre among the extensive Conroy family.

“In the weeks leading up to Kit’s passing, we spent a lot of time with Kit and we were discussing how good Milford had been to us as a family, particularly as they look after the relatives as well as the patient,” Liz explained.

“We got to thinking how many Conroys could we get to the top of Carrauntoohil and how much could we fundraise for Milford so as to give a little something back,” she continued. Nothing came of the idea for some time but Christmas brought a new impetus and the date of February 17 was set.

The names came piling in  from Liverpool, Wales, Cork, Galway, Meath, Wicklow, Dublin, Limerick and Clare.  In the end, a 16-strong group made it to the top on what was a pet, spring day. Led by brothers Daniel and Pat Conroy, the group was in good hands, though the descent was at times treacherous.

“It was genuinely an epic challenge with some of the team really pushing through their comfort zone and having to really dig deep to get to the top and back,” Liz admitted.

The Conroys, through their own efforts, successfully raised €12,200 and this was topped up with a whopping donation of €10,000 by Holland and Barrett.