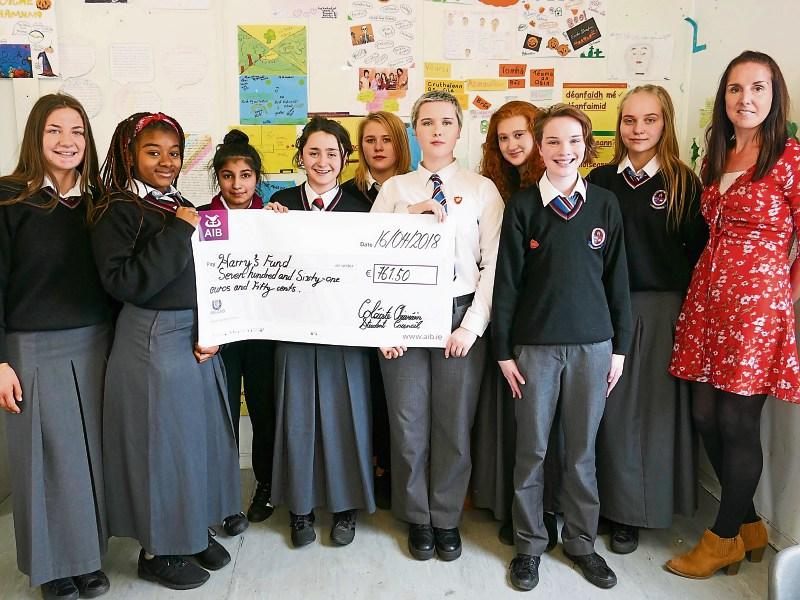 Members of the student council at Coláiste Chiaráin, Croom, with Louise Hanley, and the cheque for over €700

STUDENTS in Limerick have shown their charitable side for a little boy in Dublin who is living with a very rare genetic disorder.

Two-year-old Harry O’Brien, who has appeared on television with his mother, Maria from Mayo, and father, Denis from Tipperary, was born with Genitopatellar syndrome. He’s believed to be the only living person in Ireland with this disorder.

And to help with Harry’s 24-hour care, members of the student council at Coláiste Chiaráin in Croom organised a green colours day and a raffle.

Ms Louise Hanley and Ms Bourke helped to facilitate the fundraiser, which raised a total of €751 for Harry.

And Ms Hanley’s mother, Frances O’Regan, is also involved in a fundraiser for the toddler.

“Harry and his parents have a long struggle ahead,” said Frances, who is involved in several fundraising initiatives.

“I'm all the time in touch with them, they are very appreciative. Initially we started out with them for the Jack and Jill Foundation. You don't get much for nothing now – and they're a young couple. There's supposed to be only 20 in the world with it, it's such a rare disorder. He's a beautiful little child,” said Frances.

The motorcycle run, which aims to help in the purchase of a mobility vehicle for the family, will take place on June 17 with registration from 10am and donations accepted. It starts from Cashel, Tipperary. A GoFundMe page has also been set up to raise money.

Harry is missing the corpus callosum, the fibres connecting the left and right hemispheres of the brain. Harry is visually impaired, non-verbal and unable to sit, crawl, stand or walk.