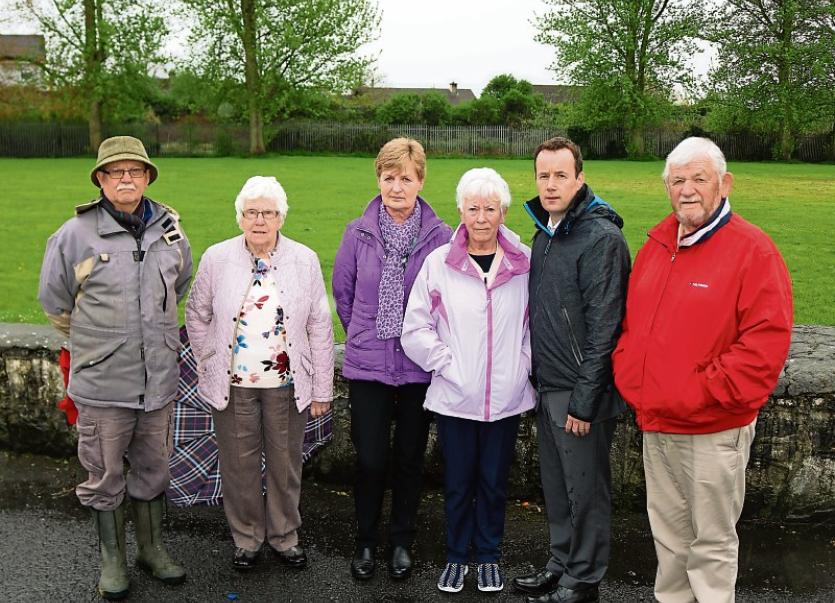 Residents of Upper Careys Road and Cllr Joe Leddin at the one-acre site which the council have planned for housing Picture: Adrian Butler

LIMERICK City and County Council has agreed to defer plans to begin examining a former quarry site as potential land for housing.

Engineers from the local authority were due to attend a small housing estate adjacent the Upper Carey’s Road to look at a green space as a location to build 11 houses.

But residents are furious the council is considering this, forming a blockade last Monday when engineers were originally arriving.

The standoff saw the gardai called.

Council staff were to try again on Monday, but it’s understood that Joe Delaney, who has a responsibility for social housing, instead agreed to meet a delegation of residents to hear their concerns.

Thomas Gallacher, who has lived in the area for 30 years, said: “The ground was an old quarry, filled in with old rubble, cars, you know what. Oil has spilt from an old railway track running along the back of here too.”

Residents received letters from the local authority saying they would be carrying out “percolation tests”.

Mr Gallacher added: “There has been no consultation with any of the local people. There has been no environmental impact statement done before all this came about. We feel council is pulling the wool over our eyes.”

He also questioned why the Guinness site, nearby, is not being looked at as a possibility for housing.

It’s something Labour councillor Joe Leddin reflected, saying: “It’s not that these residents are anti-housing, it’s that the council owns a site literally 100m from this green area, called the Guinness Site where you could build 80 to 100 units in the morning.”​

He described the idea of building on a former quarry as “daft”.

Cllr James Collins, Fianna Fail, added: “The green area was a quarry. The site was never remediated. Not alone to the council want to build housing, they want to do it on a site which is quite polluted and contaminated.”

He argued machinery could sink as the land in effect is "a quarry with a load of rubble and waste and soil on top”.