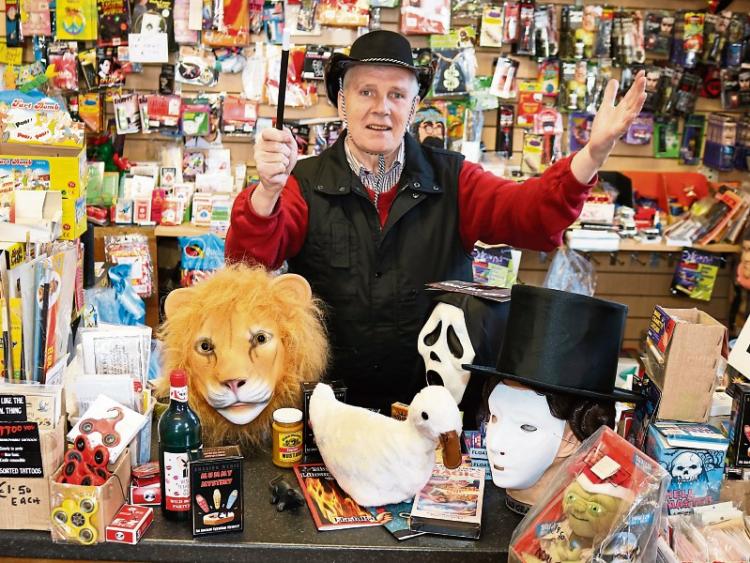 THE OWNER of the Magic Shop in Limerick will hang up his magician’s cape for the last time, as he is set to close down the popular store after 40 years in business.

Paddy Clancy, aged 68, from Corbally, has started a closing down sale before he retires in June, much to the sadness of magicians, fancy-dress fans and the thousands who grew up with his gadgets.

The father-of-three and husband to Anne, Paddy said: “It’s coming to the end of an era—a magic era.”

“I always had an interest in magic and allied fields alike.

“I worked at Ferenka and that closed, which was a huge loss at the time. I got the idea of opening a magic shop, which was strange sounding to most people. But here I am 40 years later.

“I got a number of people through the years who became interested in magic, and some of them are pursuing careers now, devoted mostly to magic,” explained Paddy, whose store is located next to the Theatre Royal.

Paddy said that renowned magician Keith Barry was one of the many fans of the Cecil Street and formerly Mallow Street store.

“Keith Barry used to call in when he was studying here, he would often call in on the way home.  The best memories were the initial years when I was always on the look-out for new products and trying to keep up to date.”

Come June, following his retirement, Paddy plans to kick back and relax.

“I will read for a bit. I have nothing specific in mind. I will just relax, just take it easy.”

Local magician Steve Spade paid tribute to Paddy: “Paddy was always a great support to me and my  magic career, any time I was passing I would drop in and show him what new effects or stunts I was working on.

“Paddy was always a gent and a fantastic magician.”