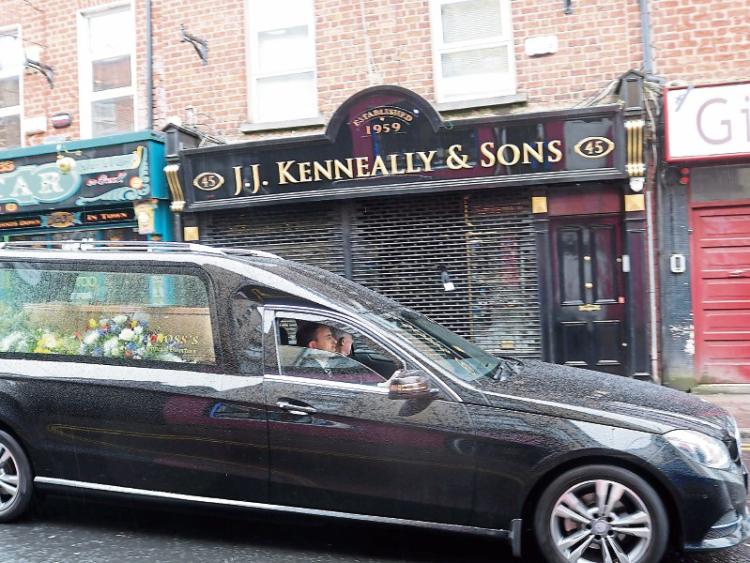 The hearse carrying JJ's remains stopped by the shop one last time before his eternal rest PICTURE: Michael Cowhey

ONE of Limerick’s most respected and well-known businessmen, JJ Kenneally has been laid to rest following 88 years of a colourful life.

The Corbally man, who ran the popular JJ Kenneally and Son’s jewellers on Wickham Street for 59 years, died peacefully at Milford Care Centre on Saturday after a battle with lung cancer.

After the requiem Mass on Tuesday morning, the hearse leading the funeral cortege stopped by JJ’s beloved store one last time before his eternal rest.

While JJ was an established businessman, he was also a leader in the sporting community.

Founder of the Limerick Cycling Road Club, JJ was a past president of Limerick Athletic Club, St Patrick’s GAA and Fairview Rangers, and a member of St John’s boxing club. He was also involved in the scouts and was an honorary member of St Mary’s Prize Band.

Up until his 86, JJ cycled to work, one of his many great pastimes. But his greatest love, according to son Robbie, was gardening. “Even when he was dying on Wednesday night, his eyes were closed and resting in the bed in Milford, the next thing you could see him with his hands moving. I said: ‘What are you doing?’ He said: ‘Those weeds. Can’t get the weeds! Those weeds have my heart broken.’ The garden was a massive thing for him when he went home from work.”

He said that JJ and his wife Carmel were a “great couple”, who celebrated 54 years together, raising four children, Robbie, Clive, Fergus and Olive.

“He used to make my mother breakfast in bed every morning before he would leave. And the biggest thing he would have given us would be to be hard-working,” Robbie said.

In 1986, JJ was shot during an armed raid at his store. In 1985, JJ and his family were held hostage by culprits who wished to raid his store.“He was very proud that he got through all the robberies. It was a measure of my mum, too. My mother was very supporting and strong to him at the time.”