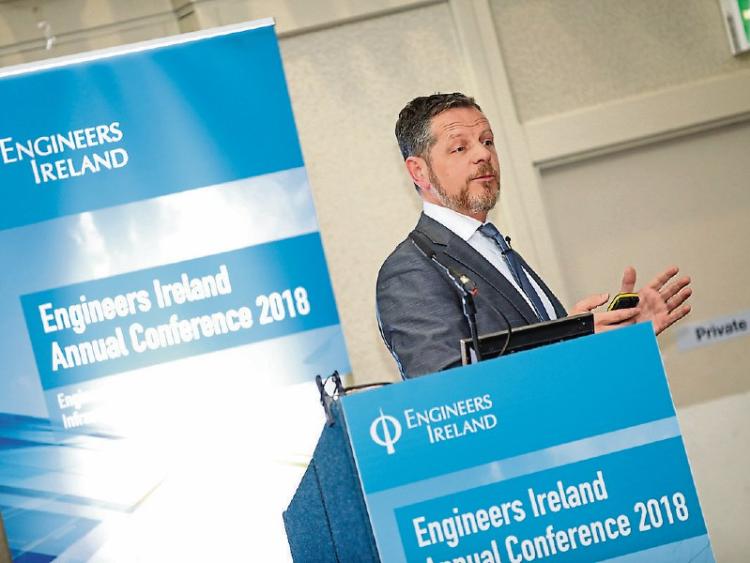 THE former secretary general at the Department of Finance, John Moran has warned the last crisis will be the “lesser” of one we might be facing into now.

And he has said the country urgently needs to help the “disadvantaged” instead of “leaving rights and rules to protect the vested”.

The Mungret native was one of the main speakers at Engineers Ireland’s annual conference which took place at the Strand Hotel. Bad planning, he says, has led to a two-tiered system across the country, and has called for “reward” for people who take part in the shared economy, for example those who use buses and live in centres.

“We have to reward people prepared to put up with the compromises from apartment living, multi-house living, and do the opposite to people who choose the other way. Why should it be that an apartment which is worth a set amount of money, one which is very useful for people walking to work, where you don’t need cars attracts the same local property tax as a very large house in the middle of the countryside.”

The consultant also suggested rural communities are dying out because of the number of people who built one-off houses.

“​We have had 500,000 one-off houses built since the 1990s. Probably all of them on an acre of land. That is about the same size as the county of Wexford devoted to lawns and hedges,” he said, “We need to start dealing with rural villages dying. But we honestly need to look at why this is happening. Perhaps it’s because no-one’s living in these villages, getting into cars, and instead of driving into these villages, they drive to the nearest shopping centre.”

“Our houses are among the most deficient in Europe, partly because they are among the largest in Europe. I don’t know if anyone took into account the CO2 impact of people driving around in cars, rather than walking,” he added, “We adopted a car-driven approach to life which increased the cost of delivering public services and all the problems I have been talking about. We’ve  underinvested in our urban spaces, making them less and less attractive, so more people have moved outside,” he said.

Mr Moran said he feels Ireland has not faced up to the challenges of this success in the correct manner.

“Think about the nurse who bought a house in Dublin 40 years ago, close to one of the city hospitals. Compare the proposition of that nurse to one of her kids: the same nurse, the same job. Do you have the same opportunity in a country which has been extremely successful. They won’t be able to live in the same house,” he said.

“These people who no longer have kids playing in the garden, or do not have a car, but they have a driveway. But they insist on keeping that real estate even though others are pushed further and further away because land is not available for the public good. What we need to do is rebalance as we go forward the public good and individual rights,” he told the conference.

Mr Moran urged more balanced regional development, saying Ireland can only really move forward if people “take off their GAA jerseys for the first time in the history of the state”.

“We now have the capacity in the state, we have an awful lot more money in the coffers than a decade ago. We need to use it wisely. It’s all too much to risk if we get this one wrong – we will feel it for the next 30 to 40 years,” he concluded.