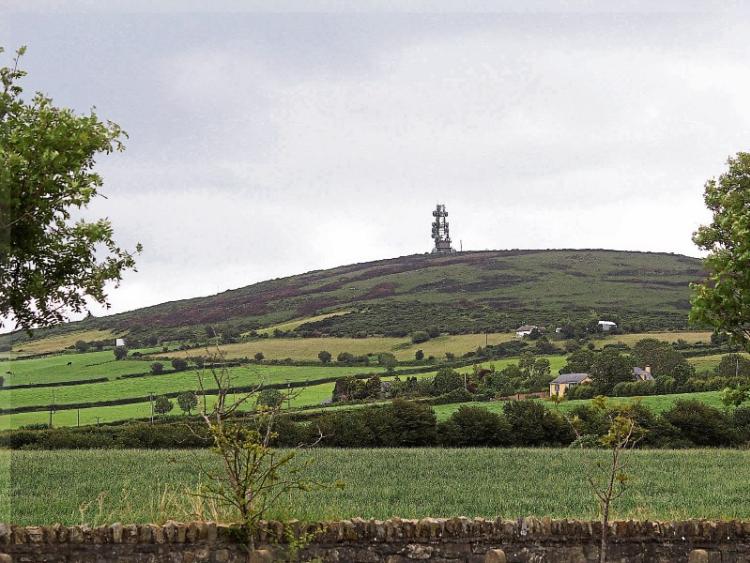 Knockfierna, outside Ballingarry, is already home to a 37.5m mast, and the new, taller structure is planned to replace the current one

A HISTORICAL group in West Limerick has objected to plans for a 40m telecommunications mast on a landmark hillside, the latest in a long battle against similar masts on the site.

Knockfierna, outside Ballingarry, is already home to a 37.5m mast, and the new, taller structure is planned to replace the current one.

Thousands of visitors walk up the hill every year. The trails, established over years by the Knockfierna Heritage Society, are steeped in “history, folklore and fairies”. There are a series of famine cottages on Knockfierna, as well as numerous ancient monuments, such as forts, cairns and dolmens.

There are also newer monuments on the hill in memory of historical figures and events, including one for celebrated writer and Limerick Leader columnist Mannix Joyce (Mainchin Seoighe).

Cellcom Ireland Ltd secured permission to remove the existing mast and replace it with a new 40m one, near some of the ancient stone structures.

The heritage society, which has opposed the masts since the first one was built in the 1990s, claimed there were a number of issues with the plans.

The group’s chairman, auctioneer Patrick O’Donovan, argued that the mast is unsightly and imposes on the beautiful landscape of the hill and its surrounds, as well as the historical significance of the place.

On a clear day, views spanning 30km can be enjoyed from the summit.

The group also accused the telecom company of using a private road to access the site. The use of a narrow road, which has old Irish stone walls on either side, by high-powered vehicles would pose a health and safety risk to the many walkers on the hill, the appeal argued.

Cellcom said the new mast is needed to improve the signal for telecommunications services, which includes high speed next-generation broadband services within a 50km radius.

The plans propose a new structure “of similar design” to the old one, but 2.5m taller. Cellcom also needed to introduce new telecommunications exchange cabins and a chain link compound.