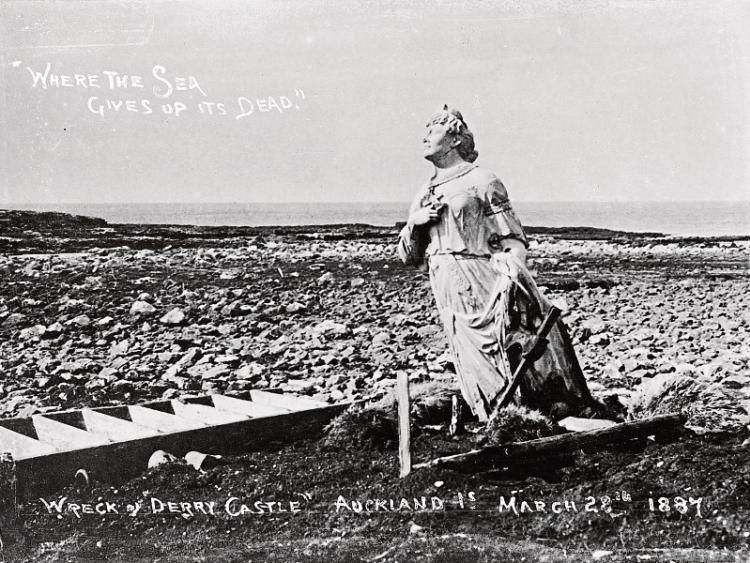 Little did James McGhie know as he boarded the Derry Castle as the ship’s only passenger in 1887 that he was about to embark on an adventure of a lifetime.

James Robert McGhie was the son of William McGhie, a miller, and Joanna Musgrave. He was born on July 5, 1856 in Ballyclough, Limerick. He was employed for a time with Spaights and Sons.

The Derry Castle was a 1,367 ton iron barque built at Glasgow in 1883 but operating out of Limerick for Spaights and Sons. It was so named after a castle on the banks of Lough Derg, Co. Tipperary. This was one of the estate owned by the Spaight family. The ship completed its first successful series of voyages around the globe in 1885, picking up sugar in Java.

It was a stormy night on March 20, 1887 as the Derry Castle was making its return journey from Australia, to Limerick. At 2am, without warning, as it made its way through the subantarctic waters around the Auckland Islands, it violently struck submerged rocks. Within minutes, the ship disintegrated and sank.

On board were twenty-three crewmembers, a cargo of wheat and the young Limerick man James McGhie. Despite the fact that the shore was visible only 200 yards away only James and seven of the crew managed to reach land, and the captain and both mates were lost. One of the mates was Joseph T Robbins of Limerick who was in his early twenties and recently married.

They laid to rest those of their fellow crew members who had washed ashore marking the gravesite with the ship’s figurehead. As the situation became desperate, they began to explore the island. It would not be hard to imagine their delight on discovering a tiny hut. Shipwrecks in this area were such a common occurrence that the New Zealand government maintained a number of castaway depots on these islands equipped with emergency supplies. Unfortunately, the depot at Sandy Bay on Enderby Island had been looted of all but a bottle of salt. The castaways constructed crude shelters around the depot.

In the days and weeks that followed the wreck the men survived mostly on shellfish, which was supplemented by two tins of herrings, a pumpkin, and some wheat, which had washed ashore. Next they needed to create fire for both warmth and to cook the wheat which was beginning to spout.

They started the fire replacing the bullet in a revolver cartridge with a piece of cotton then detonated by striking it with a sharp stone. This produced the desired result much to the survivors delight.

After 92 days, they discovered an axe head in the sand and were able to build a boat, which became known as the Derry Castle Punt from the wreckage.

Two men navigated the boat to nearby Erebus Cove, Port Ross on Auckland Island, where they obtained supplies from the government depot there. The other six men quickly joined them and they remained at this depot until rescued on July 19, 1887.

Finally, after another arduous journey that was almost lost they arrived in Hobson's Bay, Victoria on 21 September 1887, returning from an illegal sealing expedition in the Auckland Islands.

The figurehead from the Derry Castle that the survivors erected while on Enderby Island is now at the Canterbury Museum in Christchurch, New Zealand. A more permanent memorial was erected in memory of those who perished in the tragedy. The cove into which the ship crashed is now Derry Castle Cove.

James McGhie returned to Limerick where worked as an auctioneer. He never married. In 1903, he died in Barrington’s hospital and he was only forty-seven years old. He was buried in St Munchin’s Churchyard.

The Chronicle recorded his funeral as “of large proportions and of a very representative character, thus affording ample evidence of the esteem in which the deceased was held by the citizens generally”.