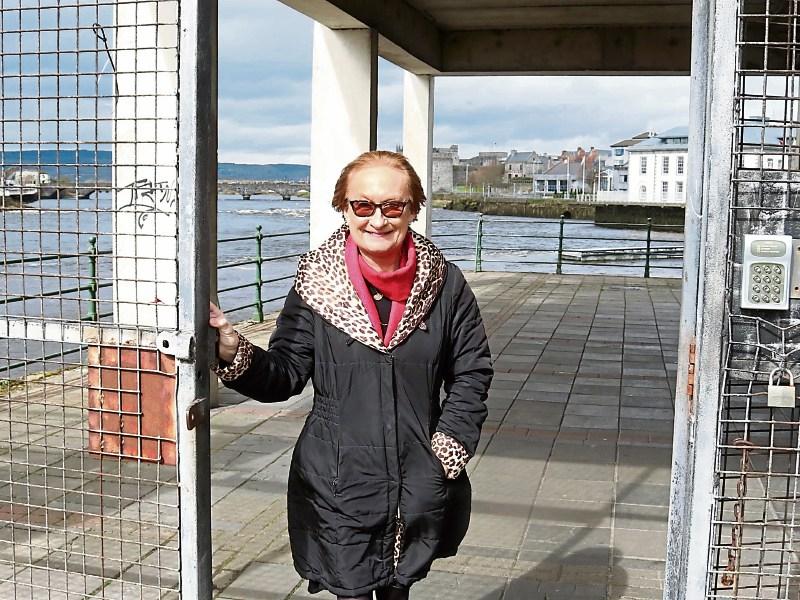 Cllr Elenora Hogan, who wants an extension of the boardwalk to King John’s Castle

LIMERICK city's boardwalk on the southern bank of the Shannon should be extended from Arthur’s Quay Park to King John’s Castle.

That’s according to Fine Gael councillor Elenora Hogan, who has lodged a notice of motion to discuss the matter at this month's metropolitan district meeting.

Cllr Hogan, a businesswoman in William Street, believes many people are frustrated at being met with a locked gate beside Sarsfield House not allowing them to complete their riverside walk to King John’s Castle.

“The three bridges walk has become very popular,” she said, in reference to the route between Thomond Bridge, Sarsfield Bridge and the Shannon Bridge.

“And there is a lot of frustration at the fact the gates are locked at the Arthur’s Quay end of the walk. They seem to be locked at weekends, and at certain times in the evening, and people become angry they have to go back along the road.”

However, An Taisce Limerick has said instead of spending millions of euro building a new boardwalk along the river, the existing pathway past Sarsfield House, over Sylvester O’Halloran bridge, and through the Potato Market could be utilised.

“Why does it need a costly boardwalk,” the heritage group asked in a tweet. “The route is already there. For a fraction of the cost, this could be made into an attractive walking and cycle way.”

For her part, Cllr Hogan believes a boardwalk would prove more viable, as the council does not own the land between the park and the Potato Market.

Limerick Leader columnist Nigel Dugdale believes a well-signposted, “360 degree walk” around the river should be put in place before any improvements are mooted.

“We are not telling people how they can walk the river. We are not signposting it correctly. When you do walk it, there are points closed.

"Imagine you’re an American or French tourist wanting to do a riverside walk? You get to a point and you don’t know where the heck you are, and you feel threatened. It’s not right,” he told the Limerick Leader.