Former Limerick chief: ‘It was in your face policing – I make no apologies’ 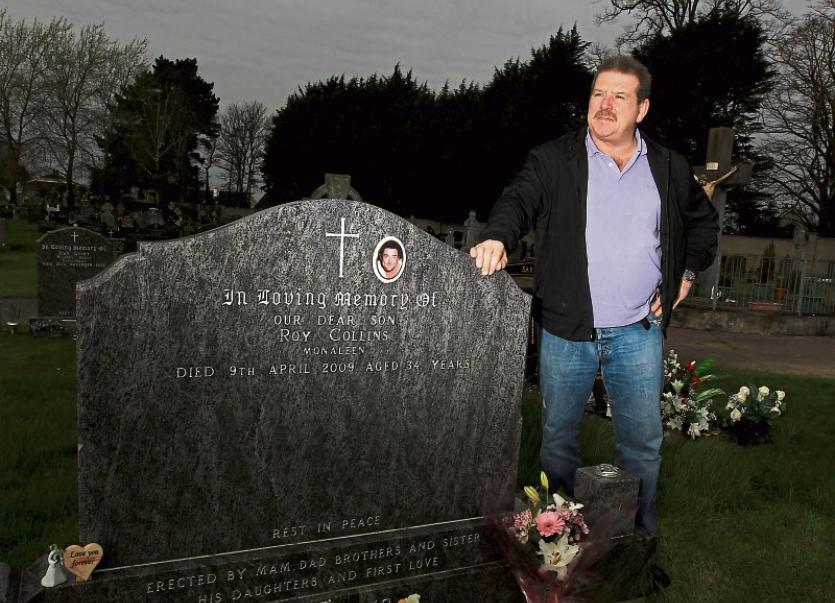 There was no need for words between Asst Comm David Sheahan and Steve Collins (pictured) after his son Roy's killers were brought to justice Picture: Padraig O’Reilly

ASSISTANT Commissioner David Sheahan oversaw a major crack-down on crime in Limerick city which resulted in the prosecution of major figures on both sides of Limerick’s gangland feud.

During those trials in the Special Criminal Court and Central Criminal Court he sat in the back pews of the courtroom. The murders of Roy Collins and Shane Geoghegan had the whole city united in revulsion. Then Minister for Justice Dermot Ahern described the latter as “an absolutely awful killing committed by scum”.

The pressure was on Chief Superintendent David Sheahan and colleagues to get results. And when those results were delivered in a court of law Asst Comm Sheahan, who has received the Limerick Person of the Month award for his efforts, said “people welled up within themselves”.

“Those families suffered so much and to get the outcomes that they did in the courts on those occasions was gratifying for me- to get them over the line. That is only part of the story. The story was the victims, and from my perspective to be able to turn to those victims and look them in the eye. You didn’t have to say anything - I think the verdict spoke for itself. My job was the investigative end of it and to bring that to a conclusion,” said Asst Comm Sheahan, who says the names Roy Collins and Shane Geoghegan softly.

“Their families have to live with the consequences of the actions of some ruthless people in the city at the time. They have to live with that for the rest of their lives. I move on to my next investigation but I don’t forget those victims. Those victims are very important to me so to look those families in the eye after the verdicts and we would end up with a hug, words can’t describe that.  At the time words were superfluous, the families needed to see justice and justice being done. They had gone through, literally, hell. It doesn’t bring closure to them. People say it brings closure but it brings part closure to them – every day they have to live with the loss of their loved ones for no reason,” said Asst Comm Sheahan.

When he arrived in 2010 he hit the ground running and aimed to hit major criminals even harder.

“It was in your face policing and I make no apologies for it. I was very fortunate that the Regional Response Unit was attached to Limerick. It was an instrument in changing the mindset of some of these people trying to take us on. We were lucky we had access to national units like the ERU and they came down to give us a dig out. We had our own units and what we really had to do was to be in the faces of those that were causing the grief around the entire city. Within that we had a number of occasions where cracks appeared and we exploited those cracks,” recalled Asst Comm Sheahan.

An instrument he utilised to good effect was Section 2A of the Bail Act.

“I was able to give opinion evidence before the High Court in respect of people who were seeking bail for very serious crimes that were happening in the city. There was a decision-making model that was going on behind the scenes. Looking at the community and how it was going to impact the community. Looking internally as to the impact, trying to investigate serious crime and then looking at the individual themselves within that sphere, and whether they were going to intimidate the witnesses or people associated with witnesses.

“I was going before very eminent judges in the High Court to try and keep people in [custody] with a view to making the place better. That was just one of the strategies but certainly it was a significant strategy that we were utilising in 2010 and onwards to keep guys in and make sure we could investigate and keep our communities safe.”

Asst Comm Sheahan said in 2008 / 2009 the number of shootings in Limerick was way above the national average. In one year there was 107 feud related shootings. In 2017, it was four.

”That speaks volumes,” he said. But back then there were residents in city estates who would hear a gun shot and jump behind the settee because they knew a window was put in, he says.

“Thankfull,  that day has gone but we forget the journey we have travelled. I would like people to reminisce on the journey. The city has moved on so much.”

While there were many successful prosecutions, Asst Comm Sheahan appealed for the public’s help with unsolved murders and in particular Lee Slattery and Jeffrey Hannan.

“There are still victims out there who haven’t got closure. There is information out there within the communities – please come forward and we will deal with it as sensitively as we did all the others so those victims can have their day in court and have some closure.

“That is hugely important from my perspective. For every good result there are times we don’t get the result we want.”

The county had its troubles too with the bizarre series of hay barn fires that caused widespread fear in Doon and the wider east Limerick area in 2015.

“Those atrocities were not long after the aggravated burglaries at the Creeds and Garveys. These were serious crimes that were happening in a very rural and easy going part of Limerick. My response was to get out into the community and talk to the community and give them a small bit of comfort and confidence that we are there to help you.

“Thankfully, all of those investigations were brought to a successful conclusion.

“We come from the people and we are of the people. I really think that is what we are about.”