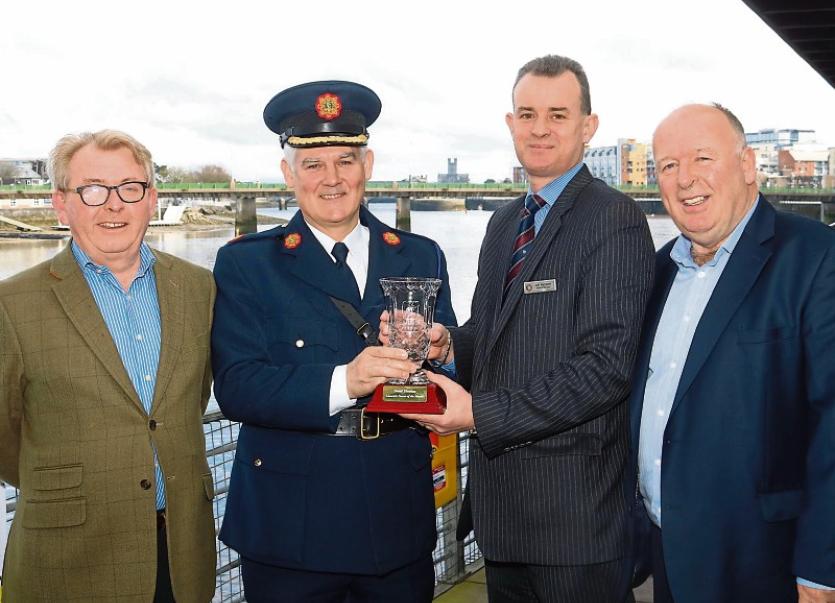 NEWLY appointed Assistant Commissioner David Sheahan oversaw the transformation of the city from “near anarchy” to the safer place we know today.

He was invited back again on Good Friday to receive the Limerick Person of the Month award.

“I have to say the 10 years I spent in Limerick have been the most rewarding period of my service. The challenges were from a policing perspective but the rewards were from a personal and community perspective. In that period of time I have watched the city pulled out of near anarchy in one sense but at the same time the way in which communities have developed and built up that resilience within themselves to say enough is enough - we have to move on - was incredible.

“From my perspective, to be honoured here today, I feel humbled and overwhelmed by the occasion and I am eternally grateful. It is not recognition for me, it is recognition for the entire garda organisation in Limerick - both past and present - for what they have done in trying to get a lid back on what was a city that was gone out of control,” said Asst Comm Sheahan.

The Wexford native, who resides in Waterford, was chief superintendent in Thurles when he was tasked with tackling Limerick.

“I got a phone call on Valentine’s Day from the commissioner [Fachtna Murphy] ‘would I go to Limerick?’. My first reaction was it was going to bring me further from home but intuitively I knew that it was going to be the biggest policing challenge of my career.

“I knew I was going to throw myself into it head, neck and shoulders because, if I didn’t do that, I wasn’t going to get the rewards I wanted out of it,” said Asst Comm Sheahan, who is married to Colette and they have three children – Hayleigh, Emma and Conor.

For the first number of years he was at his desk before 7.30am and if he was gone by 10pm it was a “good day”.

One word peppers the interview held in the Clayton Hotel and that is “community”. As Asst Comm Sheahan looks out at the Shannon on a still day he praises those who helped calm stormy waters.

“My fondest memory of Limerick is the way the communities have responded to all of those atrocities and have come out the far side of it. The biggest compliment I can pay to the people of Limerick in all that time was the way in which they supported An Garda Siochana through thick and thin

“For me it is about communities in Limerick. I’ve worked in a lot of places but the resilience and strength here is second to none. It was really a defining moment,” said Asst Comm Sheahan, who successfully led the investigation of some of the highest profile murders of recent years.

While Regeneration has been seen to be much maligned he takes a counter view.

“A lot of people at the time were critical there wasn’t enough houses being built and we didn’t see the physical regeneration of Limerick but what I think people missed is the social regeneration - the way in which the agencies worked together to achieve better outcomes and that gets lost in the telling along the way. The relationships I built up with the local authority and HSE to achieve better outcomes is a model that should be followed and certainly stood me in great stead. It wasn’t about achieving better outcomes for gardai or the local authority or the HSE - it was achieving better outcomes for the people of Limerick.”

Aside from the day and night duties, some of his highlights are the Special Olympics in 2010 and 2014, the Granny's visit during City of Culture and the four TLCs.

Asst Comm Sheahan spoke of how “magnificent” the People’s Park looked and the sense of “euphoria” during the Special Olympics events. He was also moved by visits to schools where the athletes are educated and urges people to give the schools any support they can.

“That particular year we had no murder in Limerick. A whole year without a murder in my view was a turning point in many ways because it marked a change from where we were to where we are now,” said Asst Comm Sheahan, who was also very involved with the four TLC days - he even lent a hand during his trip to Limerick last Friday morning.

The purpose is to make Limerick litter free but, he says, it “brings communities out to work together to have pride in the area”.

“Whether it is O’Malley Park, Corbally, Kilmallock or Bruff it doesn't matter,” he said.

During the interview the assistant commissioner with responsibility for roads policing and major event management is asked to reflect on a job well done.

“My overarching goal when I came here was to make Limerick a safer place and now to walk away from it eight years later I have to be proud that it is a safer place – but that doesn’t come without hard work and the response I got from the community.”

Asst Comm Sheahan concludes by saying he isn’t long gone but he is already lonesome for Limerick.

“I’m still missing the place and I will continue to miss the place. It gave me such highs and such lows but the highs I got here certainly outweighed any lows.”