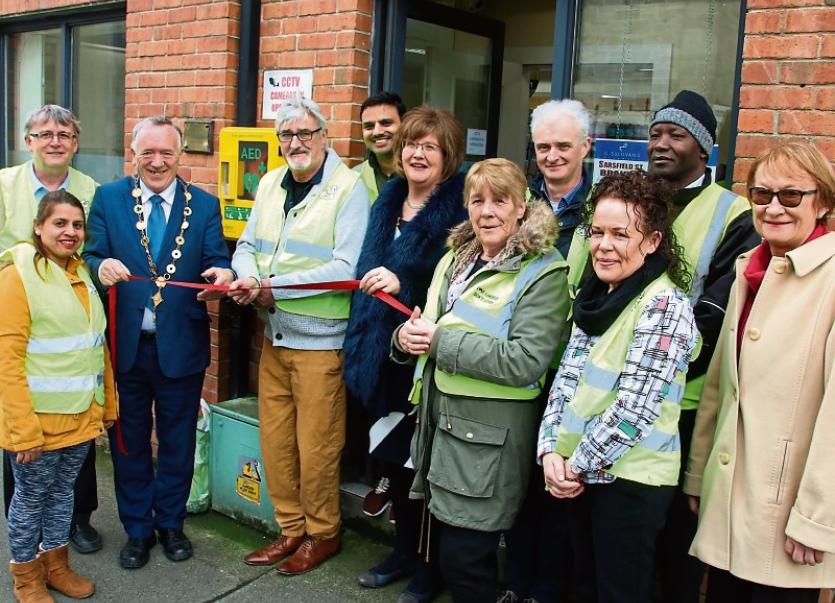 The Mayor of Limerick Stephen Keary at the unveiling of the defibrillator on O'Connell Avenue Picture: Adrian Butler

A LIFE-SAVING defibrillator which was vandalised by heartless thugs has been fixed and reinstalled in the heart of a community - thanks to the Limerick Leader!

Chairman of the Limerick South City Residents Association Jerry O’Connell has paid tribute to this newspaper for raising the issue of the vandalism in early January.

Off the back of the story, money came flooding into the residents’ group in an effort to have the crucial piece of equipment repaired and put back in its rightful place beside O’Sullivan’s pharmacy on O’Connell Avenue.

They also dug into prize money received from the Going for Gold competition, a Limerick Leader-backed effort to keep communities clean.

“Ye’ve been very good to us, let’s be honest about it,” Jerry added.

Mayor Stephen Keary was on hand to officially ‘re-open’ the defibrillator - which provides immediate first aid to heart-attack victims - for business this week.

“It’s such a vital piece of equipment for both young and old. We know over the years, we’ve seen with young people playing sport, they’ve had to use them. And they’ve been key,” he said.

“It costs just €2,000 for one of these. If it saves just one person in ten years, it has done its job. It is invaluable,” the mayor said.

Mr O’Connell, who lives on nearby St Joseph’s Street, said there was never any question of having the device repaired and reinstalled.

“Our attitude is we wanted it back as quickly as possible,” he said. “And we are absolutely delighted. It’s such an important device. There are a lot of elderly people living around the area. I have been in contact with some of the local schools as well and they’re interested in going on a course with us so we can show them how to use it,” the community leader said.

“It's so important. It’s there for lifesaving, and that’s it - end of story,” he added.

Senator Maria Byrne, who lives just a few doors away from where the defibrillator is located, praised the fundraising effort of the community, and pointed out 15 more people have now been trained in its use.

“The community has really rallied behind this,” she noted.

The front glass of the defibrillator had been smashed after the perpetrator had been unable to gain access to it.

It meant the whole box needed to be replaced, while the defibrillator underwent intensive repairs to bring it back to proper standard.

The residents’ association had held a variety of fundraising events including table quizzes and coffee mornings to pay for the defibrillator back in 2013. It is the only one in the area located on a public street.