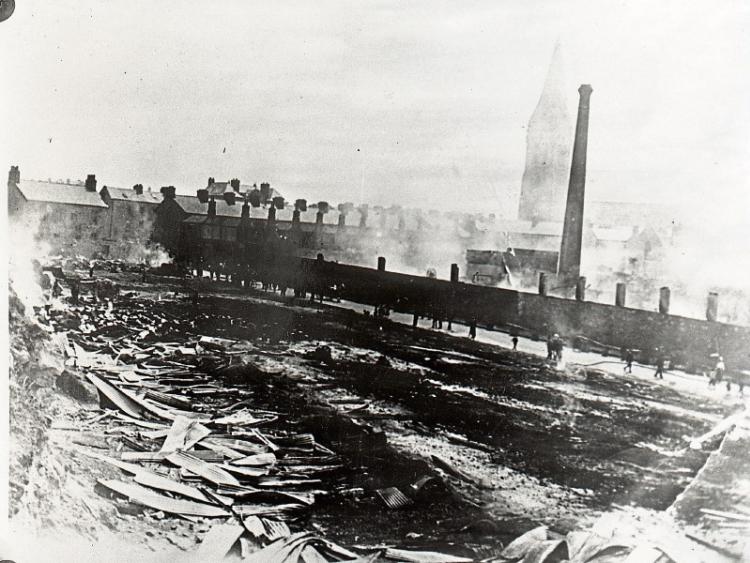 The aftermath of the 1911 fire

UNTIL relatively recently in Limerick history the city centre was besieged by fires which gutted many well known business including O’Callaghan’s tannery in 1950, Todd’s in 1959 and Newsom’s in 1974.

Another of these fires struck on Thursday June 1, 1911 which began at Messrs James McMahon and Sons, Timber and Saw Mills, Alphonsus Street, causing extensive damage and the loss of over a hundred jobs.

The fire, which originated in the machine room, was rabid in its fierceness and all devouring. Overnight, it reduced a thriving industry to a huge black smouldering pile of debris.

McMahon’s timber merchants were founded in 1830. The fire did not put a damper on this local business McMahon’s has grown to become one of the largest independent builders providers in Ireland, with a network of 11 stores nationwide.

In 1892, Slater's Directory carried the following description of the business

“Mr. McMahon's large and finely equipped establishment forms one of the chief industrial centres of Limerick, affording employment to about one hundred and turning out a variety of manufactures. The business has been carried on by the family for over a century, having been founded by the grandfather, and continued by the father of the present enterprising owner.

"The premises cover a large space of ground and include sawmills, turning shops, cooperage, wheel and carriage works, all furnished with the newest labour-saving machinery, together with very extensive timber yards well supplied with home and foreign logs and trees.”

The Chronicle was on the scene to report on the catastrophe, which was published in the June 3, 1911 issue. Not long after the employees of McMahon’s yard had left for the day at 6 o’clock, the first indication of fire on the premises was the plumes of smoke that billowed skyward.

Soon after the alarm was raised and immediate, assistance came from the 1st Battalion of the Black Watch, the Royal Engineers and the Corporation Fire Brigade.

Although the efforts by both the fire brigade and the army was heroic, they were confounded by an insufficient water supply and the fact that the yard unsurprisingly was littered with wood, which was quickly ignited. As the flames reached the opposite side of Clyde Road, where tons of timber the situation was considered desperate.

“Once the flames reached the large piles of timber in the yard all hope was lost. These burned like tinder, and the flames reaching to the opposite side of Alphonsus street, where tons of timber were also deposited, the anxiety was considerably heightened.”

After an hour, all hope of saving the building was abandoned. There was extra panic as there were gas points and an electric power station near to McMahon’s yard.

The attention soon turned to the houses in Clare View Terrace, Frederick Street and the St Vincent de Paul school on Henry Street, which were in imminent danger. The residents of these houses began to empty them and soon the streets were strewn with furniture.

Thankfully, through the efforts of all involved the houses were saved.

At 9 o’clock the fire was at its greatest fury. The streets converging on the burning building were thronged with people. There was no other option than to let the fire run its own course through the remaining wood on both sides of the road.

The members of the Black Watch fought with such vigour that several of the non-commissioned officers and men were injured and one hundred and thirty pounds worth of their clothing was destroyed.

“The daring fellows never relaxed their efforts for a single instant, and it must be said that were it not for their herculean labours the story of the damage done to property, serious as it was, would have been far blacker. They were the very saviours of the situation.

"Defiantly, and in face of the sea of flames that stretched over a considerable area, the soldiers carried on their work of saving the houses threatened in the conflagration, and finally succeeded in their task.”

As morning broke the following day, the disastrous scene was revealed. Everything was burnt out save the boundary walls, which were blackened by the extreme heat. The houses on Clare View Terrace and Frederick Street were battered at the rear. There was so much damaged caused to the St Vincent de Paul Schools, Henry Street, that they remained closed.

The Limerick Leader estimated the damage at fifty thousand pounds.

In the weeks following the fire many groups came to support of those who found themselves suddenly unemployed. The roller rink on Wellesley Place, now Clontarf Place, put on a special concert.

The Harbour Board met on June 12, 1911 to discuss the fire. The outcome of the meeting was published the following day in the Chronicle:

“At the Harbour Board meeting yesterday, arising out of the recent fire at Messrs. McMahon’s timber yard, Mr Morley made the important and eminently practical suggestion that a committee should be appointed with a view to the purchase of a fire manual for the protection of the dock premises.”

The fire showed the Board how unprepared they were for blaze in the area. It also showed how water pressure contributed to disastrous outcome and they quickly set to work to rectify this.

One of the former workers Michael O’Brien, St Joseph Street would recall the fire in the 1966 bicentennial issue of the Chronicle:

“The flames were so high that they could be seen from Ennis. The fire brigade might as well be throwing lolly-pops on it so great was the heat”.