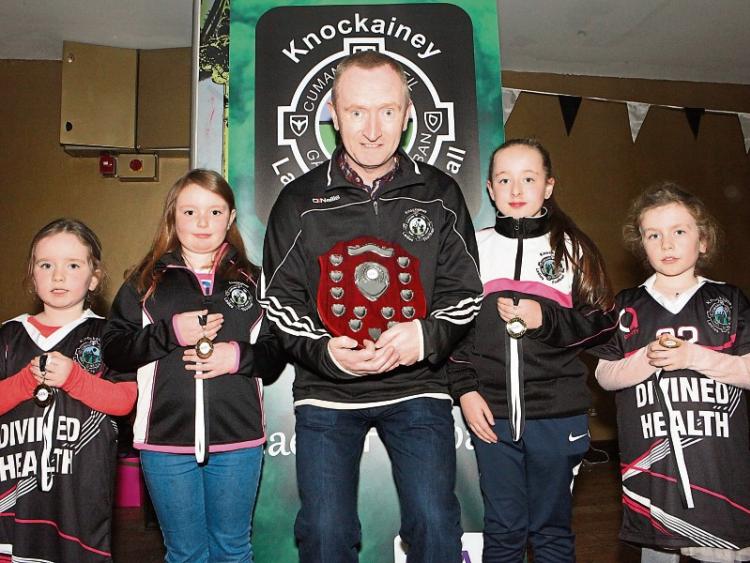 WHEN Knockainey Ladies Football was founded 14 years ago, the club's annual awards night couldn’t have scarcely been envisioned by those who formed the club.

Bulgaden Castle was transformed into the black and white club colours to host the annual club’s registration and presentation night. Blessed among the many women was chairperson, John Macnamara.

“They presented the players with their medals for 2017 achievements. Both county players gave inspiring speeches to the girls, giving them words of advice and encouragement and praised the entire club for the impressive trophy collection that was won in 2017. Gifts were presented to both players as a token of appreciation for giving up their time to attend our event,” said Mr Macnamara.

A great night was had by the large number who gathered to register players for the upcoming season and to acknowledge the club’s accomplishments in 2017. U-6s, U-8s, U-10s, U-12s, U-14s, U-16s and minors all received medals on the night.

A variety of stations were in place for registration, child protection and safeguarding, Gaelic for Mothers and Others and club gear. They were all operated by their large number of club volunteers and committee members. Each player was given a photobook of the 2017 season.

“Last season was a hugely successful year for the club. Our U-6s, U-8s and U-10s were first up to receive their medals to acknowledge their commitment to training and their participation in non-competitive blitzes during the year. Next our U-12s who were triumphant in the County A Championship final received their county medals, our U-14S were winners in the County Division 3 League winners and runners up in the County C Cup Championship and received both gold and silver medals, our U-16S won both the County A League Shield and the County B Championship Shield and received their two gold medals and our U-18s were successful in bringing home the County B League Cup and went home with their gold county medals,” said Mr Macnamara.

He said all these achievements area true testament to the large number of coaches and mentors they have volunteering with the club who give their time to development and instilling the love of the game in the girls from as young as U-6 up to adults. The U-14 Walsh/Carroll Perpetual Cup was awarded to Michelle Connolly and she was congratulated on this achievement.

“From the club’s humble start 14 years ago, success is growing every year. However, this would not be possible without the hardworking committee behind the club. Committee members put a huge amount of time into developing the club and are continuously coming up with ways to improve and grow the club every year. Also, the parents who bring the girls to training and matches and are always willing to help when it comes to fundraising, church gate collections and club events. This support is what make the club a success and for this we are truly grateful,” said Mr Macnamara, who wished to thank all their sponsors and the Kelly family and staff of Bulgaden Castle for their continuous support. New players welcome. See their Facebook page for more.