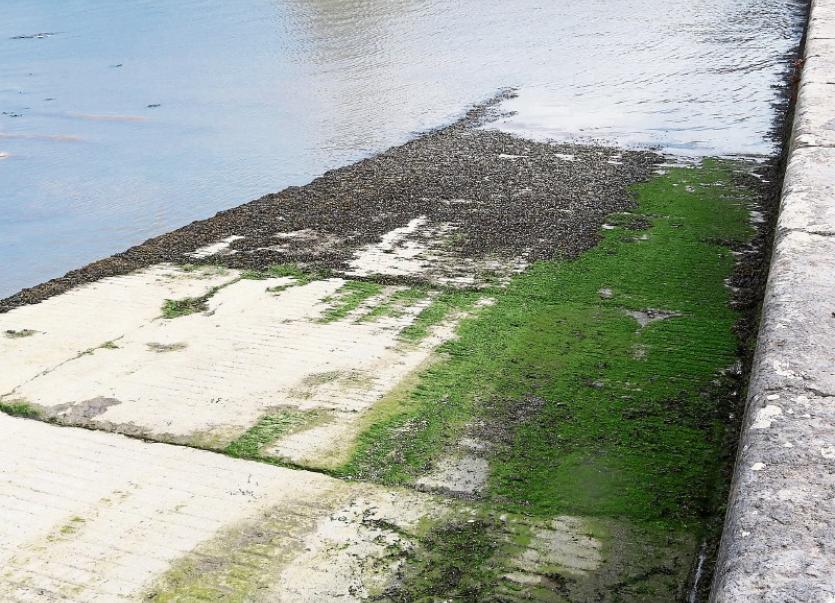 The slipway pictured this week

LIMERICK City and County Council has pledged to clean the pier in Foynes from slippy algae in the coming weeks, after local search and rescue workers claimed that it was a “Buncrana accident waiting to happen”.

The local authority did not, however, claim permanent responsibility for the slipway, as it believes the Shannon Estuary facility to be in private ownership.

The pier in the West Limerick village is used by Foynes & District Search and Rescue, and is currently partially covered in a layer of slippery green algae.

A spokesperson from the local rescue group, which is voluntary and aids in many of the rescue operations on the Shannon, said that the conditions are making it difficult to launch emergency craft.

“The slipway is very close to the public road – it’s Buncrana waiting to happen,” he warned.

“We recently spent 11 tough days out looking for a man, a mission that we were helping other crews with. It’s a tough job without having the added worry of a potential accident on the slipway. This is a huge worry to the people of Foynes.”

The group made similar calls in 2016, after which the council stepped in to clean the slipway.

The search crew member was critical that the port company would not maintain the slipway, saying that “there’s millions of euro worth of business coming in and out” and citing a new €100m launched by the major company in Limerick city last week.

For decades, the slipway was maintained by Foynes Port, but they have ceased maintenance of the area in recent years. A source confirmed that they are unable to continue the service due to legal concerns surrounding liability.

Similarly, the search and rescue group are unable to maintain the slipway, as the volunteers may be held liable if an accident were to occur.

“The port used to keep it shining for 140 years,” said the search and rescue member.

The group of emergency personnel have had to travel to other launching points in the past, because of difficulty entering the water in Foynes.

The slipway was originally part of the Monteagle Estate of Foynes, but there is confusion now as to the current owners of the site. A council source suggested that it may still be in the ownership of the Spring Rice estate.