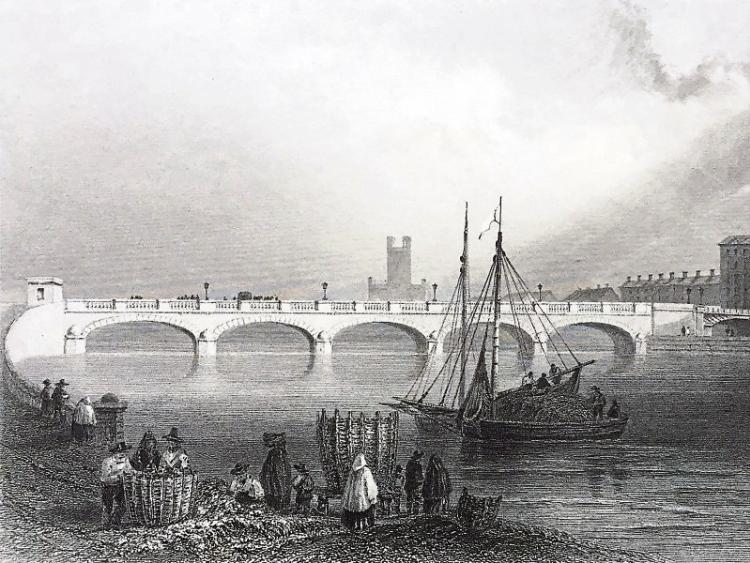 The artist William Bartlett captured a view of Wellesley Bridge, now Sarsfield Bridge, in 1842. This was only seven years after it was opened by the Earl of Mulgrave

THE role of Lord Lieutenant of Ireland established in 1690 and was abolished in 1922. He was considered the representative of the King in Ireland.

Officially, Lords Lieutenant were appointed for no set term but in practice they were usually replaced as each British Government ministry fell.

A number of these men visited Limerick and they were met with the official pomp and ceremony befitting their role at the time.

The files of the Chronicle for October 4, 1809, recorded the visit of the Charles Lennox, 4th Duke of Richmond to Limerick. In April 1807, he was appointed Lord Lieutenant of Ireland and he was visiting in this capacity.

The Duke had his wife Charlotte and the eldest two of their fourteen children, their son, Charles the Earl of March, daughter Lady Mary Lennox accompanying him. Also in the party were Lady Somerset, Major Loftus, Captain Ready and Sir Charles Vernon accompanied the Duke. The Earl of Clare, Col. Vereker, Col. Prendergast Smyth, Major Vereker, the City High Sheriffs and a vast concourse of citizens, met this large party six miles outside of the city.

The first stop for this group was the Bishop’s Palace in Henry Street where they rested for a few hours before the festivities continued.

That evening dinner was served at Milford House, the home of Col. Smyth. As the party left Henry street they were met with the city’s garrison lining the streets presenting arms.

The following day Francis Lloyd, Mayor of Limerick, presented the Duke with the keys to the city. This was followed by another dinner which the Chronicle tells us was “generally and brilliantly illuminated, and the exhibition of numerous transparencies, devices and bonfires were distinguishable in every street”.

As the new Gardens on Henry Street are nearing completion, it is important to remember why they are so named. The Chronicle states, “William Roche was introduced to the Duchess of Richmond and the party visited his elegant hanging gardens, built on vaults, upwards of 50 feet from the street, the novelty and beauty of which they were highly gratified with”.

To mark the visit of the Duke to Limerick both Richmond Street, now St. Joseph’s Street and Richmond Place, now The Crescent, were named in his honour. He retained the role of Lord Lieutenant of Ireland until 1813. In 1818, he was appointed to the role of Governor General of British North America (Canada). The following while carrying out a tour of Canada he was bitten by a fox. Unbeknownst to him the fox had rabies and duly infected the Duke who died as a result of the disease.

Limerick marked the 50th year of the reign of George III on October 25, 1809. The Mayor and Corporation proceeded in full regalia to attend a service at St Mary’s Cathedral. The garrison lined George Street, now O’Connell Street, and fired a “feu de joie”, a rifle salute with each soldier firing in succession along the ranks to make a continuous sound. There were “grand illuminations” of the city and a ball in the Assembly Rooms, Charlotte’s Quay.

The busiest man in the city that month was undoubtedly the Mayor Francis Lloyd who along with his party going also carried out his duties as Chief Magistrate of Limerick.

On October 14, he drew up a set of regulations in the weights and measures in shops stating “all milk palls and cans to be provided with covers, quarts, pints, and half-pints to be adjusted and duly stamped”. He also put in new rulings for the public and street sweepers. Sweepers must begin work at seven in the morning. After which time “no dirt is to be thrown out, except in the scavenger’s cart which are to be provided with bells”. The streets must “be perfectly clean against the hour of 10 in the forenoon”.

He pronounced that the owners of pigs found wandering around the streets were to be fined five shillings. Public houses were not to be opened at “improper hours”, these he deemed to be after 11 o’clock at night and at any time on a Sunday.

Not all of Lloyd’s acts during the month of October 1809 could be seen as positive through today’s eyes. He seized several carcases of spoiled meat from the market one morning but instead of destroying them, he had them sent to the “House of Industry and Hospital for Lunatics” for their consumption.

As with the Duke of Richmond, many streets and bridges were named honour. Among these were Charles Lord Cornwallis, Lord Lieutenant of Ireland in 1798. Cornwallis surrendered to George Washington during the American War of Independence. Cornwallis Street, now Gerald Griffin Street was named after him.

It is interesting to note that two Lord Lieutenants opened sections of the Docks but neither were immortalised in the city. These Edward Eliot, 3rd Earl of Germans who opened the floating docks on September 26, 1853 and Earl John Spencer (the great granduncle of Princess Diana) opened the graving docks in 1873.

Many other Lord Lieutenant’s visited Ireland throughout the nineteenth century, some receiving more positive welcomes than others. In 1839, the recently crowned Queen Victoria appointed the Whig politician Hugh Fortescue as the Lord Lieutenant of Ireland replacing Constantine Henry Phipps. The news of Fortescue’s appointment brought with it uproar in Limerick as the Mayor Garrett Hugh Fitzgerald, disagreed with Fortescue’s politics and did not formally welcome him into office.

This did not go down well with the general population in Limerick as can be seen by the following letter published in the Chronicle on April 9, 1839.

“Her most gracious Majesty having been pleased to appoint the Right Honorable the Baron Fortescue, to succeed our most deserved beloved and deeply regretted late Chief Governor the Marquis of Normandy.

“We, the undersigned, request a Meeting to the inhabitants of the City and Liberties of Limerick, to Swinburn’s Great Rooms, at the hour one o’clock, p.m. on Friday, the 12th Instant, to congratulate his Excellency on assuming the Government of this country, and to express our confidence that he will follow out the course of policy adopted his respected predecessor. We are obliged to adopt this mode of calling our fellow-citizens, in consequence of the refusal of the Mayor to comply with our request to convene such a Meeting – dated Limerick 9th April, 1839.”

This letter was signed by 140 prominent members of Limerick society. From the Chronicle archives it does not appear as if Fortescue visited Limerick during his two years in office as Lord Lieutenant of Ireland.