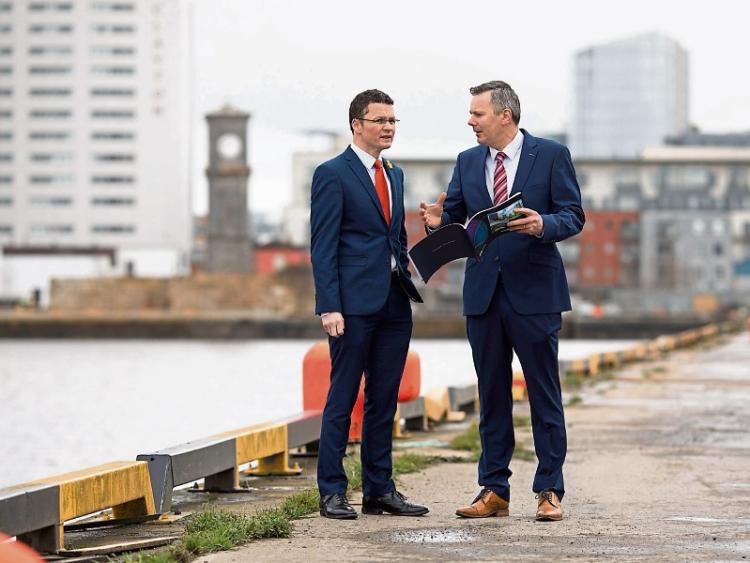 Pictured are from left: Patrick Donovan TD, Minister of State at the Department of Finance and SFPC CEO Patrick Keating. PICTURE: SEAN CURTIN/TRUEMEDIA

A NEW €100m plan which could lead to 1,000 new jobs at Limerick’s docklands was unveiled this Friday.

It will see the 110-acre site transformed into lands for warehousing and logistics companies, as well as continuing as an operational port.

In a bid to rival ports in Dublin, Cork and Liverpool, the docks will be branded as the Limerick Docklands Economic Park.

The masterplan – which could begin to be delivered upon as early as next year – will look at making the best use of iconic buildings such as the landmark Bannatyne’s Mill, a 19th century building which could be home to 300 workers.

The Corcanree Business Park will also be redeveloped to link to the port without relying on the Dock Road.

Minister of State at the Department of Finance Patrick O’Donovan formally launched the blueprint, and said: “Here we have a site at the entrance to Limerick where there are already 400 direct and indirect jobs. There is huge potential here. The Shannon Foynes Port Company has shown over the years they have the ability to deliver projects like this, and will deliver.”

Some 765,000 tonnes of goods went through Limerick Port last year, making it Ireland’s second largest such operation – and the largest in the west of Ireland.

Some images from inside the former Bannatyne Mill as the Shannon Foynes Port Company launches the Docklands Framework Strategy. @Limerick_Leader pic.twitter.com/xndwDMYJvL

For more, see the Monday tabloid edition of the Limerick Leader.