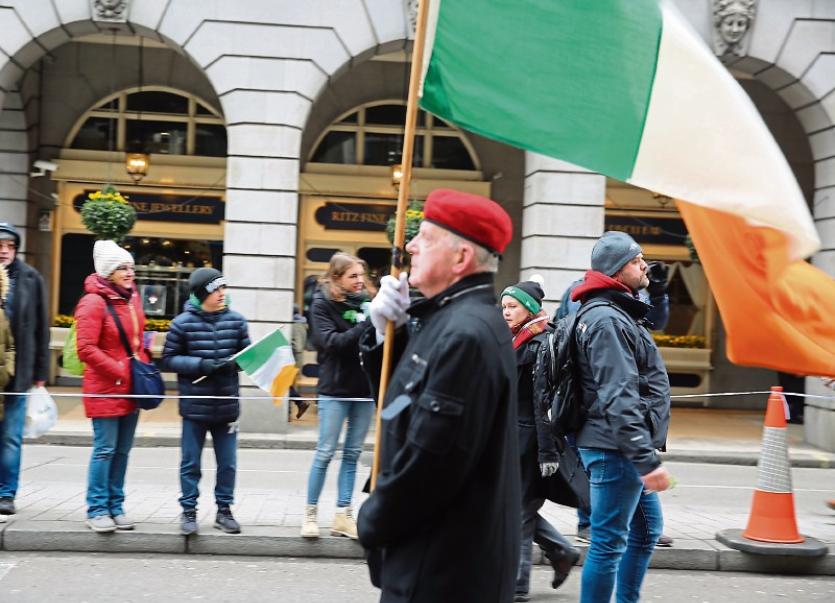 It was a day to remember for Murroe man Con Dee, who led the massive St Patrick’s Day parade in London

IT was a day to remember for Limerick man Con Dee, who led the massive St Patrick’s Day parade in London.

Mr Dee, Murroe, a former president of the Limerick Association in London, carried the tricolour flag at the front of the spectacle, which was attended by over 125,000 people in the British capital last Sunday.

It came after he was asked to do so by the Council of Irish County Associations.

“It was a great honour for me, and a huge privilege to be invited to take that role. I enjoyed it very, very much. The atmosphere was absolutely terrific, except for the cold and the chill. It wasn’t snowing or raining, but it was bitterly cold. But for an 80-year-old Limerick man to be leading the parade, it was something I will never forget,” Con, who now lives in Balham, South London, smiled.

As well as Con, more than 30 Limerick exiles took to the streets of the British capital during Sunday’s parade.

The entry from the Limerick Association had a touch of colour and style courtesy of two rickshaws which the association added to its parade entry, which took place between Lower Piccadilly and Whitehall.

“It was a pleasure and a delight to have many of our great association members and friends take part in this truly fantastic spectacle, and we express our sincerest thanks to London City Hall for what turned out to be one of the most well-organised and memorable St Patrick’s celebrations in recent years,” said the current president of the Limerick Association John Giltenan.

“It’s a key occasion. It’s a wonderful chance to celebrate our heritage. And believe you me, people did celebrate it on Sunday! There was a sea of Irish flags everywhere,” he added.

“Personally, it was up there with the best, if not the best parade in recent memory,” Con added.

Meanwhile, the Limerick Association in London, which exists to support Irish ex-pats in Britain, will mark its 65th anniversary in 2019.

A variety of events are already in the pipeline, Caherdavin man Mr Giltenan, who lives in Kidbrooke, south east London, confirmed.

For more information, and to join the Limerick Association, you can search for Limerick in London on Facebook.