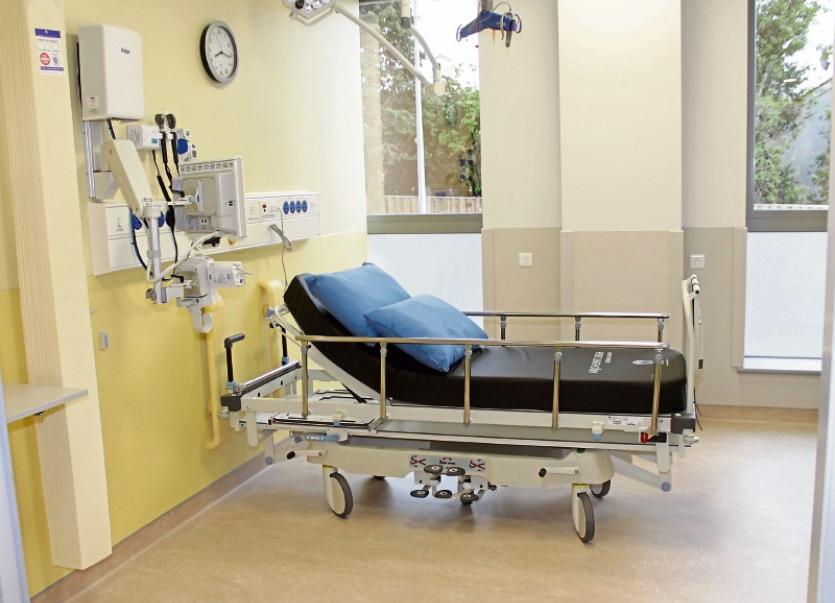 A bed in the new emergency department at University Hospital Limerick, which is again facing high volumes of patients this week

It comes as the Irish Nurses and Midwives Organisation report that there are 68 patients being treated on emergency department trolleys and on additional trolleys or beds in the wards at the Dooradoyle hospital this Thursday – the highest in the country.

That follows figures of 64 on Wednesday and 66 on Tuesday, more than double than most hospitals nationwide that day, according to the figures.

Sinn Fein TD Maurice Quinlivan criticised the Minister for Health Simon Harris for “refusing to turn up in the Dáil to answer questions on the crisis overcrowding situation” at UHL.

Speaking on Wednesday after raising the situation in the Dáil, Deputy Quinlivan said: “I am extremely disappointed the Minister for Health is not here today to answer questions on the problems in University Hospital Limerick. Actually it is unacceptable at this point.

“This is the twelfth time I’ve asked the Ceann Comhairle to raise the crisis conditions in UHL for discussion at topical issues and it’s the fourth time it has been chosen for debate. Each time the Minister for Health has failed to turn up. That is not good enough.

“University Hospital Limerick is in a constant state of crisis. 64 people on trollies today, 66 yesterday, 80 last Monday, the shambles goes on.

“Senator Paul Gavan and I wrote to Minister Harris in January seeking a meeting to discuss the situation in UHL. The Minister never responded to this request.

“The Minister clearly has no answers or solutions to this overcrowding crisis, or else the conditions in UHL are not a priority for him. It’s unacceptable that he is not here to answer, and an insult to the people of Limerick who rely on this hospital.

“I have no doubt I will be standing here later this year, highlighting the same problems in the same hospital,” he added.

The Minister was called upon as overcrowding at UHL reached an all-time high with 80 patients on trolleys on March 12 to visit the hospital, while Deputies Jan O’Sullivan and Willie O’Dea described the situation as “frightening and intolerable” and “absolutely deplorable” respectively.

The UL Hospitals Group has said it is battling the “worst flu on record” and in the aftermath of that peak situation with 80 on trolleys last week, apologised “for any distress or inconvenience caused to patients or their loved ones who have experienced long wait times in the ED at UHL, and we would like to reassure patients and their families that we are working to alleviate the situation”.