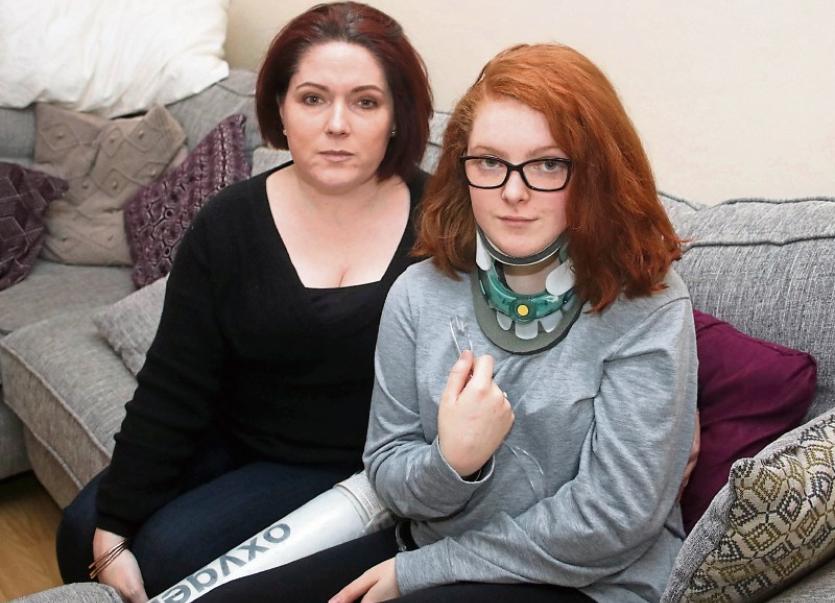 A TEENAGE girl from Limerick has received life-saving neurosurgery in Spain after her family’s lengthy bid to raise €120,000 for the operation.

Sixteen-year-old Ciara Micks, from Raheen, was diagnosed with Ehlers Danlos Syndrome — a debilitating connective tissue disorder — in 2015 and has been forced to undergo intensive treatment.

Following the heartbreaking diagnosis, Ciara’s health rapidly deteriorated and later developed serious associated conditions, resulting in devastation for her, her mother Anne and the family.

In a previous interview with the Leader, Anne said that Ciara saw EDS experts in London, who referred Ciara onto specialists in Barcelona to undergo specialist surgery, which would cost in the region of €120,000.

Ciara’s symptoms include chronic pain, fatigue, insomnia, headaches, fainting and bladder complications. And “most serious of all”, cervical and atlantoaxial instability, which is the dislocation of the skull from the spine.

The main part of the surgery, Anne said, involved the fusion of the neck, meaning “she will never be able to move her neck again or move her head left or right, or up or down”.

Ciara arrived with her family in Barcelona last week, and she entered the operating theatre at 8am on Thursday.

In a statement to the Leader this week, Anne said that Ciara spent 15 hours in the theatre, as surgeries were completed at 11pm.

The first part of the surgery involved the fusion and decompression of a number of vertebrae, and the removal of two ribs.

The second part of the surgery involved a tethered cord release but this “didn’t go according to plan”, she said.

“They were able to fix the cord which was the priority, but due to Ciara’s small bones and pedicles, they were unable to carry out the lumber fusion. They did an alternative support, as an interim solution,” she said.

Anne said that since the operation, her daughter has had “very tough days” as she has become resistant to a number of pain controls.

“Ciara is on a cocktail of Ketamine, methadone and tramadol, and she can still talk. It’s bizarre.

“The neurosurgeons have been in everyday including weekends to see her and examine her wounds. Great care is taken. We have been overwhelmed by the care and attention from everyone here. We are not the only family here. There are many more with EDS.”

Ms Micks, from The Grange, said over the past week “I have experienced a variety of emotions, from utmost fear, to relief, from anger to joy. But above all else, it’s the love and admiration I have for my daughter that surpasses all else.”

Anne said that the night before her surgery, Ciara “took great pleasure in accentuating her head and neck as much as she could, knowing this would be the final time she would ever be able. She wasn’t sad, she was upbeat - ‘It is what it is Mum’ - as we all were”.

And even though Ciara was a little nervous before the surgery, her “sense of humour and sarcasm was always there”.

“Couldn’t I have picked an appendectomy or something? It had to be life-saving neurosurgery,” Ciara told her mum the night before, she said.

Ciara’s grandfather, the late Sean Micks, used many of his contacts to raise funds for her €120,000 surgery before he passed away peacefully on February 27.

“I know he is looking down on us and giving us the strength to keep going, during the next few weeks,” Anne said.

“Above all we cannot thank our family, friends and supporters at home, who have kept us going from the start, fundraised, donated, and pleaded for help on our behalf.

“I would also like to thank all my friends and family at home who are looking after my Mum, while we are here, as she wasn’t well enough to travel.

“Please keep us in your thoughts and prayers as Ciara has a very difficult few weeks ahead before we will be able to return home,” she said.

Anne is chairperson of an awareness and support group for patients of EDS and Hypermobility Spectrum Disorder, and her aim is to create awareness about the condition.