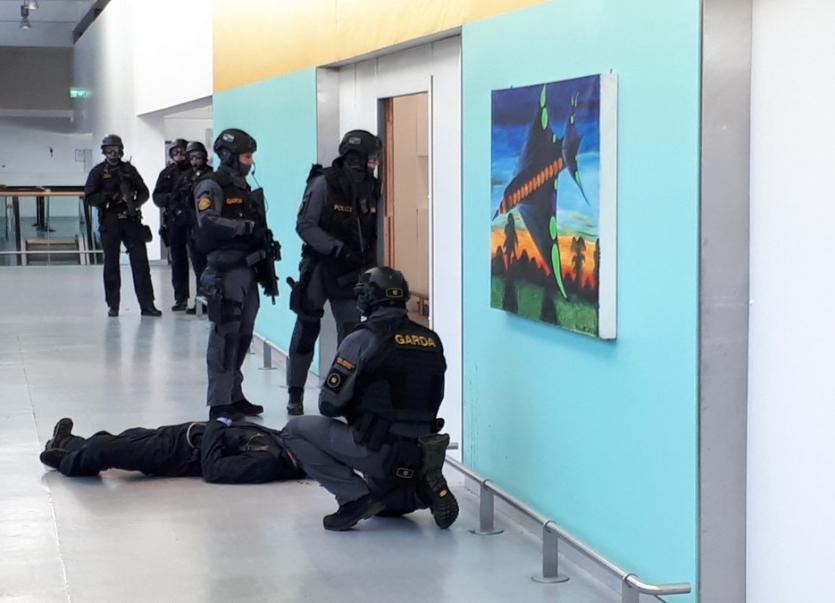 EMERGENCY services are taking part in a major training exercise at Shannon Airport this Tuesday afternoon.

The bilateral training exercise between An Garda Síochána and Defence Forces is focusing on a simulated armed attack by members of a ‘Doomesday cult’ and is being simulated in the departure lounge of the facility.

A terrorist attack by members of the Doomsday Cult is being simulated at @ShannonAirport as part of a training exercise involving members of @gardainfo and @defenceforces @Limerick_Leader pic.twitter.com/G9jCoE73Yz

Lots happening at @ShannonAirport as a simulated terrorist attack is continuing. A number of hostages have been taken @Limerick_Leader pic.twitter.com/maGqnhEcyi

Members of the armed Emergency Response Unit have breached the room at @ShannonAirport where hostages were being held during a simulated terrorist attack. An army EOD team remains in the car park outside @gardainfo @defenceforces @Limerick_Leader pic.twitter.com/defnRh3mDx

Passengers intending to travel from Shannon Airport are being advised that the exercise will be completed by 4pm this evening, and are asked not to be alarmed by the activities.

"The exercises will also include the Defence Forces tri-service assets including Army perimeter security and EOD (Explosive Ordnance Disposal), Naval Service and Air Corps assets and Shannon Airport Police personnel. The objective of the exercise is to test the responses and interoperability of agencies in support of An Garda Síochána, who hold primary responsibility in such cases.

"The public are advised that there will be additional security services activity in the Shannon Airport area during the course of the exercise."