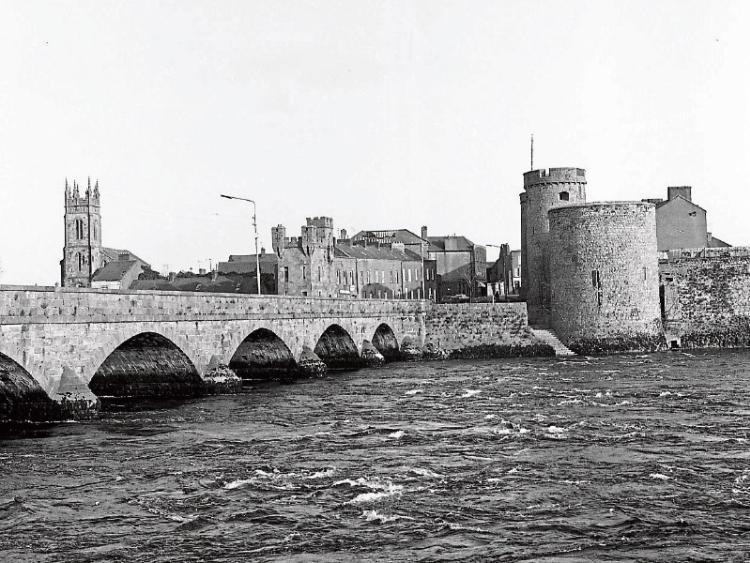 On Thomond Bridge Andrew Watson encountered one Patrick Omadhawn. Mistaking him for a vagrant, Watson dispatched him to the House of Industry a mistake which brought the ire of Fireball McNamara

THE second owner of the Chronicle, Andrew Watson, was a prominent member of Limerick society.

According to his obituary, he was born and reared in Limerick. He was an Alderman for many years becoming Mayor in 1812. He was the senior magistrate of the City of Limerick as well as Justice of the Peace for the County Council. He died in 1832 aged 77 and is buried in St Munchin’s churchyard.

Watson was also the treasurer, which was the then term for manager, of the House of Industry on the North Strand, now Clancy Strand.

This building housed the old, infirm, beggars, widows, orphans and the destitute. The role caused one of his greatest adventures and indiscretions.

While out on Thomond Bridge, Watson spotted a man known as Patrick Omadhawn coming towards him. Omadhawn who never wore shoes, a coat or hat was a “favourite fool” in Clare. Watson, seeing only a destitute beggar instructed two bailiffs in his company to take Omadhawn directly to the House of Industry where he was imprisoned.

Word quickly travelled back to Clare of this transgression and the notorious John “Fireball” MacNamara rode into the city, heavily armed. He then “sprung his horse in a bound over the bars of the old Exchange in Nicholas Street challenged Andy to mortal combat”.

John “Fireball” MacNamara was the son of Colonel Francis MacNamara, M.P. for County Clare (1790-1798). This branch of the MacNamaras lived at Moyriesk House near Bunratty. It was said that from his cradle, John MacNamara gave indication of future association with battle as he received his first morsel of food from the point of a sword. He reputedly fought at the Battle of Vinegar Hill in 1798 and suffered a gunshot wound in the thigh.

Back in Limerick however, this mortal combat did not ensue as news of Fireball’s approach had already reached Watson and he, with his staff, had taken to the fields. Fireball then set Omadhawn free and both travelled back to Clare. Years later, Fireball had taken ill with an ulcer, which, due to the antics of the fool, burst while in a fit of laughter. He died in 1836 and was buried in Quin Abbey.

Andrew’s son Henry Watson (1789-1860) became Mayor of Limerick for three years between 1823 to 1826 and again in 1854. During his last term as Mayor, he revived the ancient tradition of throwing the dart at Scattery Island to claim ownership of the Shannon for the people of Limerick. The Chronicle recounts the events of that day, Monday 31 July 1854:

“At half-past nine, a discharge of cannon from the quays, taken up and repeated from the deck of the Erin-go-bragh steamer, gave note of the preparation, and the Mayor, attended by his civic retinue, bearing the silver maces of the Corporation, soon appeared and having embarked was joined by the members of the Corporation, Town Clerk and Treasurer, the City Magistrates, Military, Officers, Clergy, Merchants, heads of public departments &c.

The booming cannon continued for some minutes, until the guests had arrived, when the steamer was loosed from her moorings and moved from the quay, the band playing ‘Garryowen’, amidst loud cheers from the crowds assembled.

At Cratloe, the first salute to the Chief Magistrate and Corporation was given from before the residence of Augustus Stafford, Esq. M.P., whose flag was raised and lowered as the aquatic cortege passed along.

At every other point along the river, at both sides of the Shannon, similar demonstrations of respect were exhibited. At Bushy Park, the residence of Dr Peppard, flags were hoist and a salute of seven guns fired. At Beigh Castle, the Revenue station, all hands turned out, and the Union Jack, and Royal Ensign were lowered cannon discharged, and hearty cheers given by the officers and peasantry. At Foynes, Glin, Mounttrenchard, &c. similar respect was paid, but at Kilrush the demonstration reached its climax. The quay was crowded with people from end to end, and flags floated in every direction, including that of the trades of Kilrush, which were prominently displayed, while Mr P. B. O’Brien, the active agent of the City of Dublin Company, occupied an elevated position, and was conspicuous in his anxiety to pay due respect to the Worshipful Mayor and his party.

Cheer after cheer resounded in the air, and the discharge of the cannon continued for some time. Here, too the Revenue officers were not unmindful of their duty, the Royal Ensign was hoist, and from the station the ‘Admiral of the Shannon’ was saluted with, customary honours… the Garryowen steamed on to Scattery, where the Mayor performed the ceremony of firing the arrow into the waters, amidst enthusiastic cheers from all on board.

In doing so, the Mayor said it was a duty which he discharged with much pleasure – a pleasure doubly enhanced by the fact of his having 31 years ago, when Chief Magistrate of Limerick, marked out the boundary of the Corporation in the same place.

The vessel cast anchor and dinner was announced. The cabin compartment being totally inadequate to accommodate the numerous guests, the company had to partake of the repast in three parties – the first party ushered down comprising the Mayor, Corporation, Magistrates and Clergy. When the name of Mr John Goggin is set forth as caterer, we need not add that the tables were supplied with everything of the choicest and best description, including meats, fowl, pies, tarts, jellies &c…

… the Garryowen reached Limerick at a quarter to nine o’clock, when the entire company accompanied the Mayor to his house in George’s stret, preceded by the Trades, with their banners, and the Band that were one board. On reaching his residence the Mayor again thanked them all for their kindness and good wishes. We should add that the Garryowen steamed around Scattery Island and Foynes harbour, Capt. Irvine, the able commander of the vessel, was most attentive and courteous to the Mayor and his guests.”

Henry Watson was known as a quirky character outside of public office too as he would look through every paper and make notes on scraps of paper, which he would put into his hat. When “taking the hat off to a lady” the paper whole flow like confetti about him. “He was High Sheriff several times – there was no public board of which was not one of the prominent and active members. He was fond of fun, joke, repartee, laughter – and was the same to everyone”.

On March 10, 1860 Henry Watson died following an unsuccessful operation to remove a fishbone that had become lodged in his throat. He was buried with his father.

- The Limerick Chronicle is now a free publication distributed with the Limerick Leader.

The Chronicle, Ireland’s oldest continuously published paper, dates to 1768. It is now getting a new lease of life with a strong focus on local history. Our archive files are full of fascinating stories that help reveal how our predecessors lived in Limerick over the past few hundred years and the new-look Chronicle is a terrific read and a real keepsake.

We are delighted that historian and researcher Sharon Slater has joined our team and will produce some fascinating historical stories and provide expert commentary on many great old pictures.