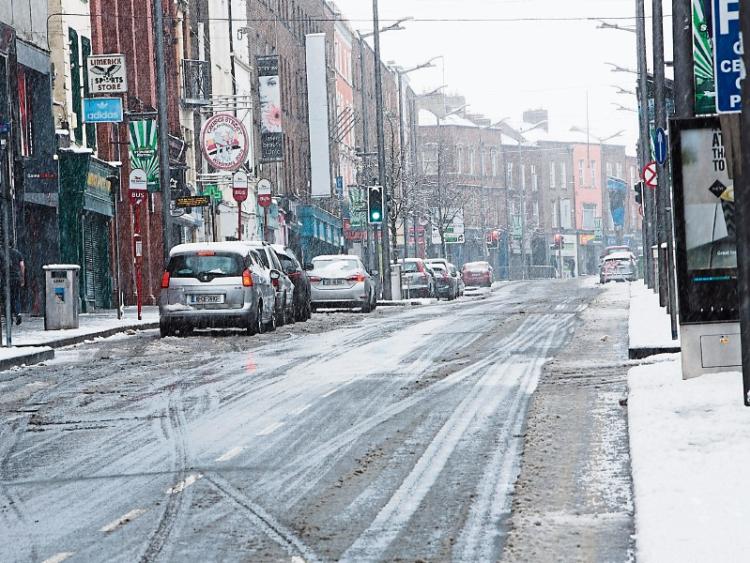 Businesses across Limerick either closed or curtailed opening hours as a result of Storm Emma Picture: Liam Burke/Press 22

A LIMERICK city retailer has revealed that he had one of his busiest days ever for the sale of alcohol as Storm Emma set in.

James Ryan, who runs Centra branches in O’Connell Street and William Street, was, like many retailers, forced to curtail his hours as snowfall left Limerick coated, footpaths and roads impassable.

The shop closed at 4pm on Thursday, and opened later the following day when the city experienced the worst of the weather conditions.

“On Thursday, we had one of our busiest days ever on alcohol! People were obviously looking to stock up on essentials,” James laughed.

Other than this, he added: “Bread and milk became the two most important things in the world. We ran out of things like teabags, sausages and ham too. [Sales of] things that wouldn’t normally be big sellers were going through the roof.” ​

He believes more latitude could have been shown to retailers, believing the government’s guideline to be at home by 4pm was ill-informed, at least in the city.

“I was driving at home at 4.30pm on Thursday, and it was perfect. But the streets were deserted. It hinders business,” he added. He said on Friday his trade fell 40% as against the normal Friday.

One shop which did close its doors was Michael Gleeson’s shoes at William Street. The proprietor said Storm Emma had made a difficult February “even more difficult”.

“We are just hoping the month of March will be a bit better,” he added.

Meanwhile, across the county, where snow conditions were arguably more severe, shopkeepers braved the elements and largely continued serving their local communities, albeit with some restrictions.

Padraig Broderick, of Broderick’s Spar in Croom, ferried staff to and from their homes so they did not miss out on a day of pay.

He praised staff for their “trojan” effort through the storm. He said the weather brought home the value of local suppliers.

“We were working with local bakers, Twomeys, so we were able to drive to Dromcollogher to get bread. Twomey's never stopped baking as far as I could see, so we ended up doing fairly well on the bread front," said Mr Broderick.

Mark Nagle, Nagle’s Eurospar in Bruff added: “In fairness I think we all enjoyed working to be honest. There was a good atmosphere. There were a lot of people coming into the store and just hanging around for an hour for a chat and there was a real gallows humour about the whole thing.”

The businessman revealed that staff limited the number of loaves given out to people.

“We preferred to see ten families benefit from 10 loaves of bread, rather than one family,” he explained.

And he praised the community for swinging into action as the snow began to recede over the weekend.

“It was great to see members of the Tidy Towns and the local community council out on Saturday morning clearing the church yard and the footpaths just to make sure people were safe going up to Mass on Saturday evening. Times like this can bring out the best in communities and we definitely saw that over the weekend,” he added.

While convenience stores remained open, specialist outlets did not fare so well.

Newcastle West boutique owner Flo Flanagan, who is also chair of the town’s business association, said she had lost at least three days of business due to the inclement weather.

"The weather has had a devastating effect.We are now hoping that the St Patrick's weekend will reboot the town.”

In Askeaton, Centra did not open until 2pm on the Friday.

”We were lucky enough in that we only had two members of staff who had to drive to work.

“Most walk, so we are lucky that most staff are very local," said its manager Brian Hanly, "In terms of supplies, we were hammered alright. The bread was being taken off the trolleys as it was being delivered.”

Now, in the aftermath of Storm Emma, retailers are still playing ‘catch-up’ somewhat, with suppliers a day or two behind in replenishing stock.

“There are delays with the deliveries and there’s stuff that Musgraves couldn’t get up from the depot in Cork, like there was a problem with a milk delivery,” Mr Hanly said.