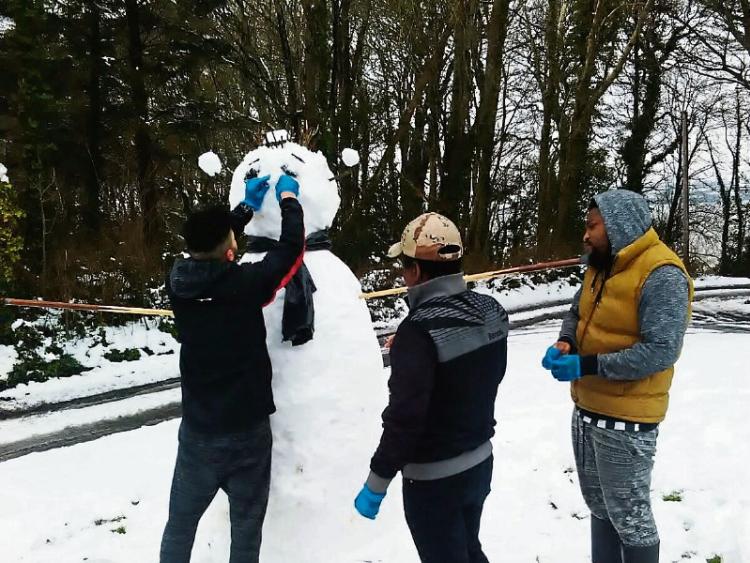 MANY people may have been suffering from ‘cabin fever’ while stuck at home in the snow last week, but for those in rural direct provision centres, cabin fever is an everyday reality.

In fact, the snow was a welcome change of speed for the residents at Mount Trenchard, Foynes, many of whom come from countries where the weather is quite the opposite.

Like almost everyone else in Ireland, the asylum seekers took to the outdoors last Friday to play in the snow. At nearly 40 years old, William Walker, from Malawi, had never seen snow before.

“I very much enjoyed it, it was nice,” he told the Limerick Leader. “It was the first time in my life seeing snow like this. I was playing in the snow like a baby!” he said.

William, who used to work in the motor industry, has been in Ireland for three years, and as an asylum seeker, is unable to work. Some of the residents at Mount Trenchard fill their days with a limited range of courses available to them.

“I’m just stuck here, not doing any course right now. But I am willing to do so, because I feel I have wasted so much of my time doing nothing, time that will never come back,” he said.

“I feel very bad. Back home I used to be busy always, and I was used to that. But now it’s three solid years doing nothing. I feel bad most of my days, I always have sleepless nights, I pray that God could do something fast for me,” added William.

Asylum seekers in Ireland are fed and housed in direct provision centres while they await refugee status, but the process often takes years. They receive a weekly allowance of €21.60, and are not allowed to work in most circumstances.