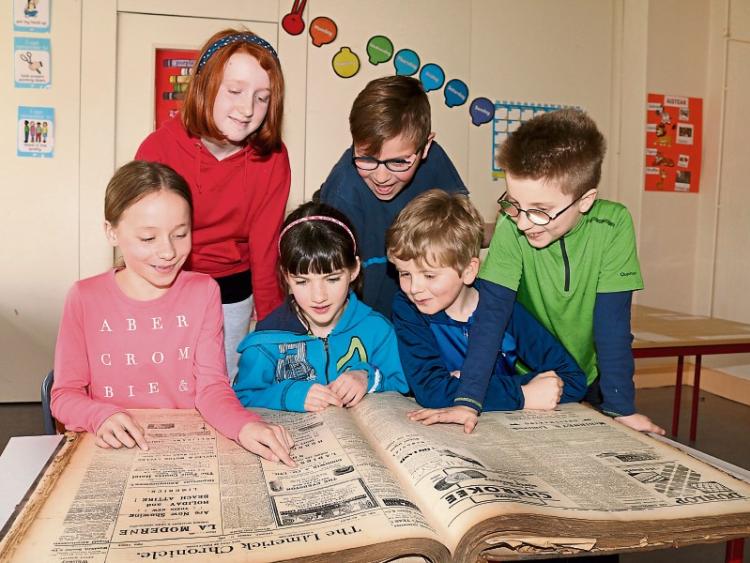 Pupils from St Michael's National school looking at Limerick Chronicle papers from 1931 and below, the front page from October 27, 1910

THE story of the Limerick Chronicle spans two and a half centuries. The journal founded in 1768 by Limerickman John Ferrar, a prominent bookseller and printer, is still the longest running newspaper in Ireland.

Although it was believed for about 100 years that the Chronicle was founded in 1766, this was disproven in the last decade with the discovery of early issues of the paper. These prove, once and for all, that it began its journey in August 1768.

Unfortunately, the first issue is missing from the collection, now held at the University of Limerick. However, the second and subsequent issues are viewable online at the UL Special Collections website. 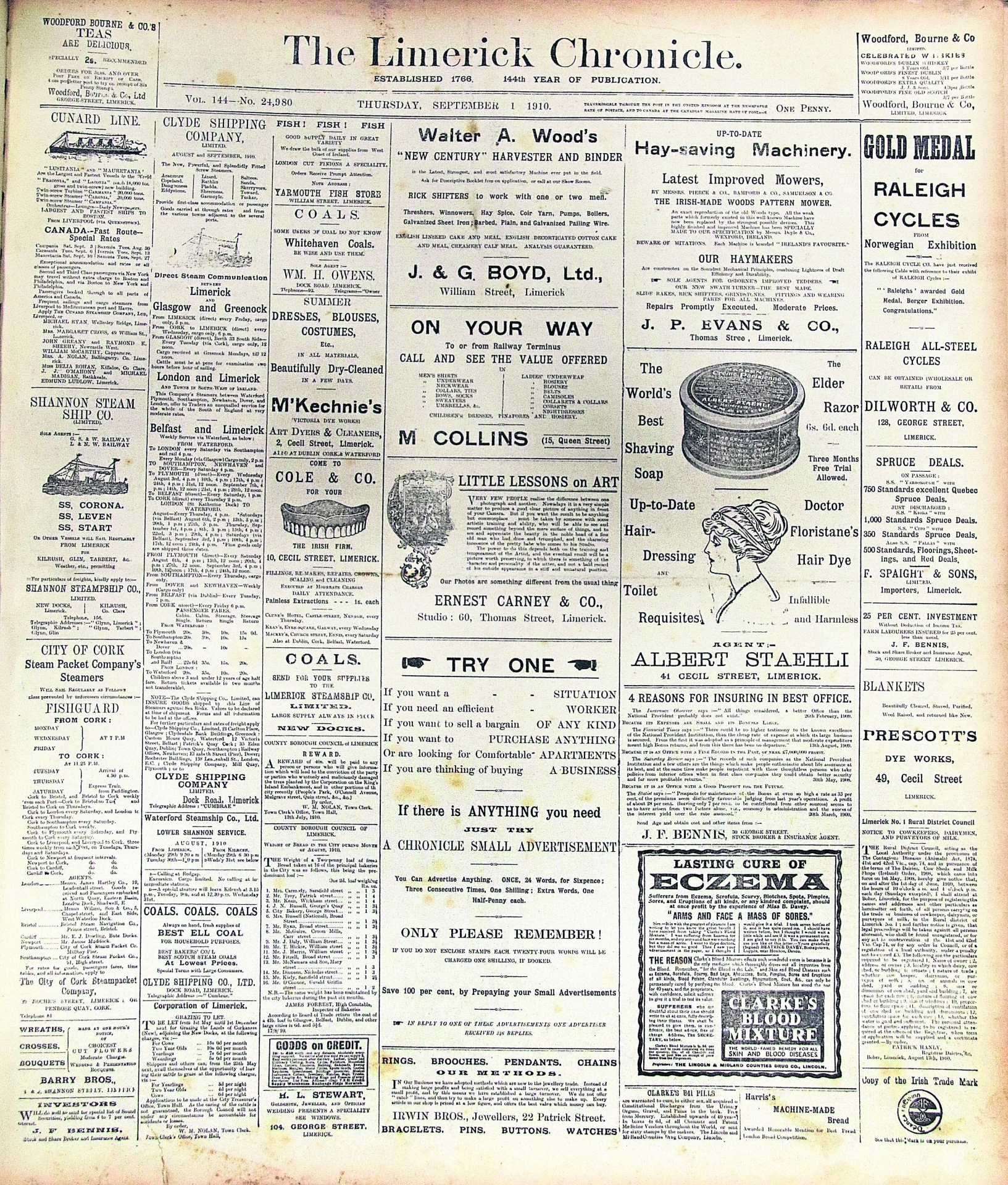 Originally, the Chronicle offices and printing works were located in Quay Lane off Nicholas Street in the heart of King’s Island. Within a few years, Ferrar had moved shop a short distance away to the corner of Mary Street and Bridge Street.

The early newspapers advertised this location as “within two doors of the Exchange”. The Exchange house the city’s covered market and council chamber.

The move to this new location was advantageous on many levels as Mary Street was at the time one of the principal thoroughfares in the city as the development at Newtownpery was in its infancy. The Exchange was still the centre of business within the city.

Ferrar pre-empted any begrudgery to his endeavour by announcing in his second issue, dated August 15, 1768:

“The public will be pleased to consider, that the Business the Proprietor has undertaken, requires some Experience and the closest Attention, he therefore hopes for their candid indulgences, and that they will not hastily condemn him, for any little Defect in the compiling, or trifling Error in the Print.

"If at any Time, this Paper should be late in the Publication, he hopes the Variety of Matter will make amends for the Delay, and he assures them it shall be his particular Study and chief Pleasure, to improve his infant Plan, and to give them a useful and entertaining Chronicle.”

In 1781, Ferrar’s son-in-law Andrew Watson took over as owner and the family legacy continued down the Watson line until 1856. John Bassett was the proprietor from 1856 to 1862, when his widow continued in partnership with Hosford until 1874, when Hosford took over. After this, the names of the owners do not appear in print.

Ferrar did not retire completely; instead, he returned to writing.

In 1767, Ferrar published the first edition of “History of Limerick”. This book became the foundation stone on which much of what we know of Limerick history in the early 18th century stands. In 1787, he rewrote his history of the city to include the county.

A copy of this book made its way to Pope Pius VI, who dictated a letter to John Ferrar:

“Health and the grace of God to Our worthy friend greeting. Your celebrated ‘History of Limerick’ written with laudable industry, has been presented to Us. We have the pleasure placed it in Our private library, where We shall often reflect on this proof of your respect for Us. Your attention to ecclesiastical affairs in past ages and the zeal with which you trace the history of your native country affords Us great delight and satisfaction.

"If there are any records or anecdotes in the archive of Rome, which may be useful to your publications, We have ordered copies of them to be transmitted to you. Hence you have a strong proof of Our earnest desire to deserve well of those who pursue the study of history and who think favourably of Us, as you have done, not only by the present of your work, but by your obliging letter. May the God of all mercy long preserve you all and fill you with the light of His ineffable grace.

“Dated at St Peter’s Rome, Dec 13th, 1787, in the 13th year of our Pontificate. Callistus Marinius, Latin Secretary to his Holiness.”

Ferrar also became heavily involved with education for all. In 1793, on Charlotte's Quay, he opened the Limerick United Free School for both boys and girls of all religions. He later moved to Dublin where he continued to write and fight for the improvement in the education system until his death in 1804.

The newspaper moved along with the gradual shift, geographically, for the city centre from Mary Street to Rutland street and on to O’Connell Street as the city developed.

In 1874, the Chronicle moved to the heart of the new city at 59 George Street, now O’Connell Street, where the paper was printed out of a stone outbuilding to the rear of the main building.

In its earliest incarnation the Chronicle was a staunch supporter of the Establishment though this tone changed as with its change in location and owners to a more liberal outlook.

Although newspapers were comparatively expensive in the nineteenth century and not everyone could read, the Chronicle could still claim a readership of 9,000 weekly. One copy could easily be read by upwards of ten people as coffee houses were popular where the newspapers of the day were left for customers to peruse.

It was also common for a literate member of the household to read excerpts from the paper aloud as a form of entertainment.

The reputation of the Chronicle stretched much further than Limerick. Reports from the Chronicle were reprinted as far away as Australia, keeping those who had left the confines of the city and county informed on the major happenings.

While in Limerick, the news was not just local; the citizens were kept up-to-date of events worldwide, including the comings and goings of members of the royalty and landed classes as these were the celebrities of the day.

The Chronicle, unlike many of these other newspapers, reinvented itself with changing times, and this was the key to its survival.

In the early 1950s, the three owners of the Chronicle, Harry Pickford, Paddy FitzGibbon and Paddy Moroney went into discussion with the Limerick Leader over a possible takeover. In 1952 the Leader purchased the Chronicle for the hefty sum of £17,000.

The transfer to the Leader got off to a rocky start with the minutes of their board meeting of June 2, 1953 stating: “Disappointment has been expressed at the position relating to the Chronicle … that considering the amount costed that the return was practically negligible”.

A few months later on February 2, 1954, the issue was revisited in the management and their minutes show that the “Chronicle figures showed an upward trend as also does the Leader advertising”.

So the amalgamation of the Chronicle proved to be a success for the continuation of its legacy, which could have ended abruptly in 1952.

The Chronicle from its inception until 1862 was issued twice a week. That year the paper tax was abolished and on February 11, the paper began publishing three times a week – on Tuesdays, Thursdays, and Saturdays, a practice that continued right up to 1979, when publications reverted to one issue a week on Tuesdays.

Now we see the Chronicle migrating once more, but continuing into its 250th year.

- The Limerick Chronicle is now a free publication distributed with the Limerick Leader.

The Chronicle, Ireland’s oldest continuously published paper, dates to 1768. It is now getting a new lease of life with a strong focus on local history. Our archive files are full of fascinating stories that help reveal how our predecessors lived in Limerick over the past few hundred years and the new-look Chronicle is a terrific read and a real keepsake.

We are delighted that historian and researcher Sharon Slater has joined our team and will produce some fascinating historical stories and provide expert commentary on many great old pictures.