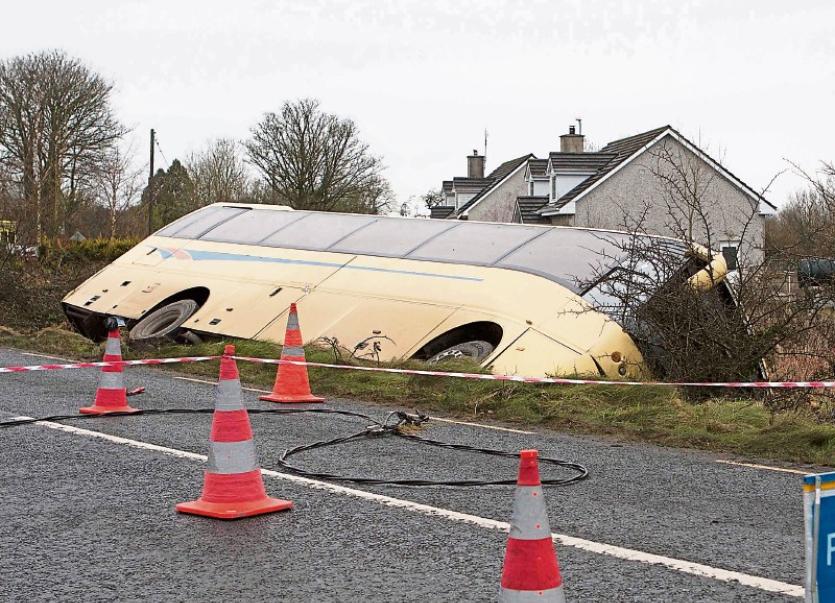 UP TO 200 people gathered in the Millennium Centre in Caherconlish on Saturday for a thanksgiving Mass offered up after nobody was killed in a school bus crash.

The accident which resulted in the bus ending up in a ditch happened at Connolly’s Cross in Caherline exactly three weeks ago. Thirty six had to be hospitalised but there were no fatalities.

Three local ladies – Sally English, Eileen Hourigan, Nancy Lane – got together to organise a thanksgiving Mass in the days after what could have been a terrible tragedy.

“There could have been fatalities and we would have been rallying around after a tragedy. We thought we should do something to say thank you for a miracle,” said Nancy.

The teenagers involved, their families, gardai, fire brigade, ambulance service and teachers were all invited.

Fr Donovan took a very holistic approach in his homily and asked how everyone was feeling in their minds and bodies.

“Trauma happens when something out of the ordinary happens. It takes a good while to deal with it. Don’t minimalise the effects of trauma. It is also held in the body,” said Fr Donovan.

There was a great spirit of support in the Millennium Centre, he said.

“It was a thanksgiving for all the various people who helped out and all the people who were there. On the day of the crash young people helped young people.

“The gathering last Saturday was about creating ongoing support and creating an environment of care and healing,” said Fr Donovan.

Despite the Ireland and Wales match starting at 2.15pm nobody rushed away after the 1pm Mass was over.

“I learned from talking to parents afterwards that they were traumatised as well by this – some of them are finding it hard to sleep. They were thinking of the worst that could have happened, they were feeling helpless which is one of the aspects when trauma happens,” said Fr Donovan, who complimented a young student for the reflective music he played during the service.

Nancy Lane said Fr Donovan gave a lovely homily and the prayers of the faithful read out by students were particularly moving.