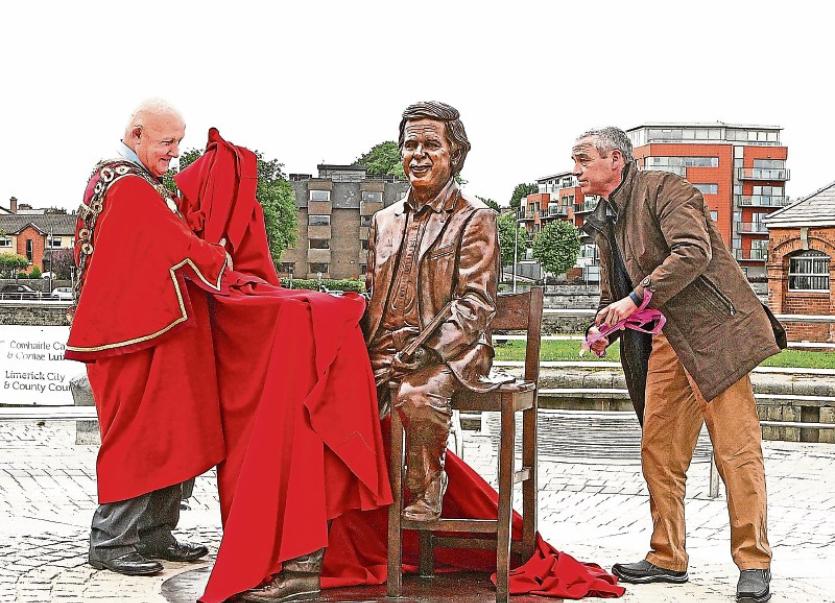 A CONTROVERSIAL statue of the late Sir Terry Wogan in Limerick which cost almost €60,000 to erect should be recast as it is "an embarrassment", according to one local councillor.

Independent councillor John Gilligan said not recasting the Wogan statue would represent a “cowardly move” on the part of council bosses.”

“It’s a waste of space. It’s something which continues to be an embarrassment. I think we need to recognise that when we get things wrong, we simply cannot ignore them and hope they will forget about them,” he stated.

The figures have led to calls for more accountability, with Cllr John Gilligan calling for the Wogan statue to be “melted and recast.”

Sinn Fein member Séighin Ó Ceallaigh asked why the statue of the broadcaster, who died in January 2016, resulted in a bill of more than 10 times the one received for the tribute to Foley, who passed away in October the same year.

Cllr Kieran O’Hanlon, who unveiled both statues during the latter stages of his term as mayor, said decisions on the cost of both sculptures were handled by local authority management.

Upon its unveiling last year, the statue of Ennis Road born Mr Wogan – famous for his witty commentary at Eurovision Song Contests through the years – was criticised.

There were suggestions the statue bore a closer resemblance to other people, such as actor Will Ferrell, singers Nick Cave and Glen Campbell and footballer “Ronaldo’s dad”.

“It’s not what we are looking for. There is no point saying ‘it will do’. We are not building a city based on this. It should reflect the person who we have cast to honour,” Cllr Gilligan said.

He did, however, praise the Foley memorial for both its design and location.​

Cllr Ó Ceallaigh said members of the authority should have more say over the cost and design of statues.

“I’d have no problem with memorials going up. But councillors should be involved in making these decisions. The first I heard about the Terry Wogan statue going up was when they unveiled it,” he said.

Cllr O’Hanlon defended the sculpture, and said having attended a memorial service in London in memory of the broadcaster, it was important for him to unveil it.

“I had met a lot of Terry’s ‘Togs’, his supporters. They had all booked board and travel and had other plans made. “Certainly I did want to unveil it during my mayoralty. It meant a lot to me to be able to do this,” the Fianna Fail man said.