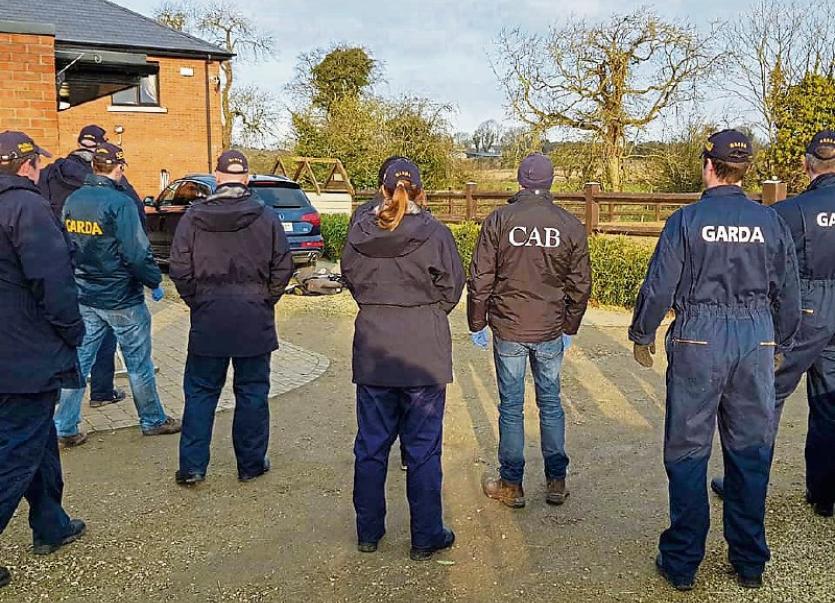 More than 100 gardai and members of the Criminal Assets Bureau carried out the searches Picture: CAB

THE Criminal Assets Bureau (CAB) says investigations are continuing following a series of raids in Limerick and across the country on Friday.

A number of houses on the outskirts of Limerick city were searched during the operation which is targeting the activities of a Dublin-based criminal.

The man, who is aged in his mid-thirties, has been a target for garda and Spanish police for over a decade. It’s understood the houses in Limerick which were searched are connected with associates of his.

More than dozen local gardai were deployed during the search operation, which also involved officers from CAB and a number of national garda units.

While there were no arrests, various documentation and electronic devices were seized and will be subjected to detailed examination.

Almost forty premises in Limerick, Dublin, Meath and Longford were searched during the operation which lasted for several hours.

”This search operation involved the search of 20 residential premises, 18 professional premises and one gymnasium,” said a garda spokesperson.

Approximately €15,000 cash was seized along with five high-powered vehicles which included an Audi Q7, a Mercedes Vito, a Volkswagen W Golf Mark 7 GTD, a Volkswagen Golf and a Honda Motorcycle.

Five watches including a Breitling, two Rolex, a Cartier and a Legend were also seized while a freezing order has been made in respect of a substantial amount of money in a bank account.

"This CAB investigation into an organised crime gang is continuing, and marks a significant development in the progress of this investigation.

"The Criminal Assets Bureau are relentless in their mission to identify the criminally acquired assets of persons and to deny such people these assets. The motivation of these organised crime gangs is greed for wealth and we will do all we can to deprive them of this wealth,” said Detective Chief Superintendent Patrick Clavin.