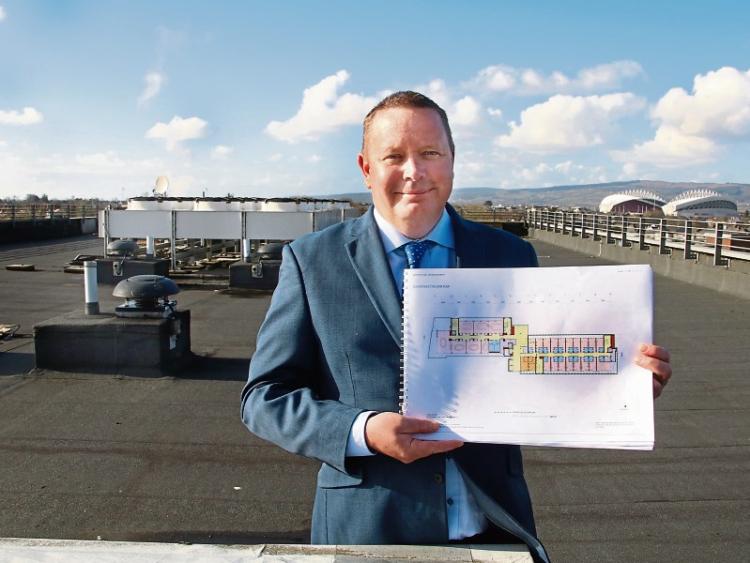 Strand Hotel boss Stefan Lundström beside the area of the premises where new building will take place Picture: Adrian Butler

ONE of Limerick city centre’s top hotels is set to increase its accommodation to over 200 rooms as part of a €3.5m upgrade scheme.

Management at the Strand Hotel, at O’Callaghan Strand, are hoping to add 20 new rooms by next year as part of an upgrade at the four-star riverside property.

Strand Leisure Investments has announced its intention to apply to Limerick City and County Council for planning permission for a single storey extension of 687 square metres to accommodate the expansion.

The proposals will see a new floor added to the north wing of the existing hotel, and will see up to 15 new positions created, as well as dozens more temporary jobs during the construction stage.

“We are continuously increasing the number of staff here, and I’d expect to see more jobs,” said Stefan Lundström, the hotel’s general manager.

At present, Mr Lundström added, the south wing, facing the River Shannon, which accommodates the City View suite meeting rooms, is one floor higher than its oppoiste number.

This development will see the height of both sides equalised as a result.

Speaking to the Limerick Leader, the general manager said: “As the city is growing, our occupancy is quite strong. On [Munster] matchdays, and pretty much every Saturday in the year, we would be full. From May until the end of September or October, we’d run at very high occupancy. We feel the city needs these extra rooms to be honest.”

The Strand Hotel presently has 184 rooms, while these new bed spaces would bring it up to 204.

“We continually invest in upgrading the hotel, and we must do this in order to stay in front.

This year will see an even larger investment in our facilities as Limerick is becoming a vibrant business and social hub and the development plans will really help boost the local economy and create employment opportunities,” Mr Lundström told The Limerick Leader.

He also pointed out hotel management had engaged the services of many local businesses, including Limerick’s Abbey Owney which is commissioned to make the furniture in the proposed new rooms.