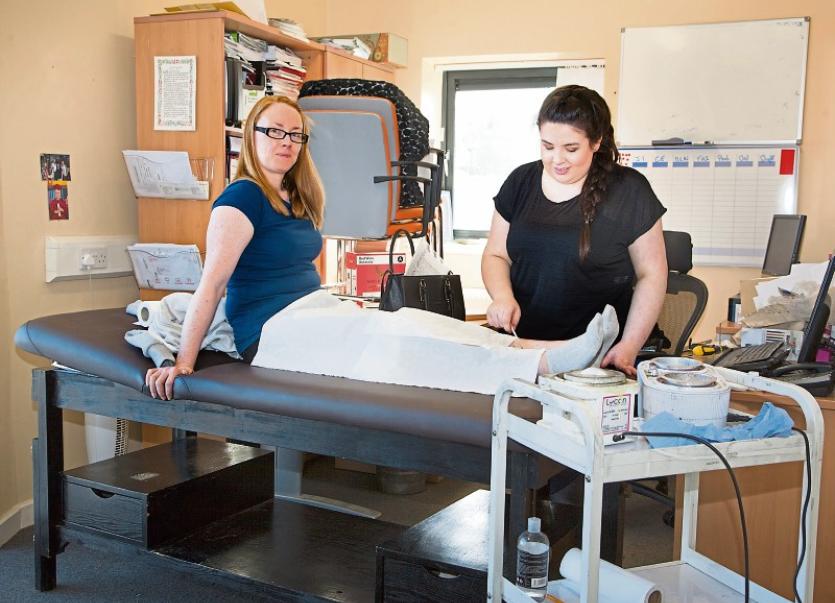 WHILE most brides-to-be enjoy a pre-wedding pamper in a salon, one Limerick woman had to make do with getting beautified in a bureau this week.

Eleanor Lynch O’Connor from Garryowen is getting married in Copenhagen, Denmark, this weekend, and had booked in for an appointment at the beauty salon at the St Munchin’s Community Centre in Kileely.

There was sadness earlier in the week after the salon was destroyed by a fire following an electrical fault, cutting off power to the community centre.

Amazingly, it was able to open to the public the following day – and Lisa Ledger, who runs the ‘Be Beautiful’ salon at the centre, pulled out all the stops to make sure Eleanor was ready for her big day this weekend when she ties the knot with Indian national Shobhit Chopra.

She took over her mother, general manager Linda’s office, where she set up a treatment table ensuring Eleanor was wedding ready.

“Honestly, I knew whatever happened, they would look after to me,” a grateful Eleanor told the Limerick Leader.

“But to be in the middle of Linda’s office on a bed, it was hilarious!”

Linda said: “We cancelled every other appointment, but we couldn't cancel her. We couldn’t let her down.”

Eleanor, who has worked at the St Munchin’s Centre for almost two years, is marrying her fiance  in Copenhagen because, she says, of the amount of “bureaucracy” there is here.

“We have to go through so much red tape to prove we are in a relationship, and do you know what? It’s not worth the hassle.

“All I need in Denmark is a passport, a freedom to marry certificate and a birth certificate,” Eleanor explained.

The happy couple are to spend a few days in Copenhagen before returning to these shores to travel around the Irish countryside on honeymoon for a few days.

Sadly, Shobhit can only stay here until May, before he returns to Canada – where he has citizenship.

From there, he will have to apply for a spouse’s visa, which can take up to 12 months to process.

In that time, he will not be allowed to re-enter Ireland.

Eleanor admits it will be tough to be apart from her new husband so soon after getting married.

Thanks to a whole host of volunteers, however, Linda hopes it will be back in business in the next week.

Munster and Ireland number eight CJ Stander is to visit the community centre this Monday to launch a fundraising effort to help following the fire.

His wife, Jean-Marie cut the ribbon to open the beauty salon back in 2014.