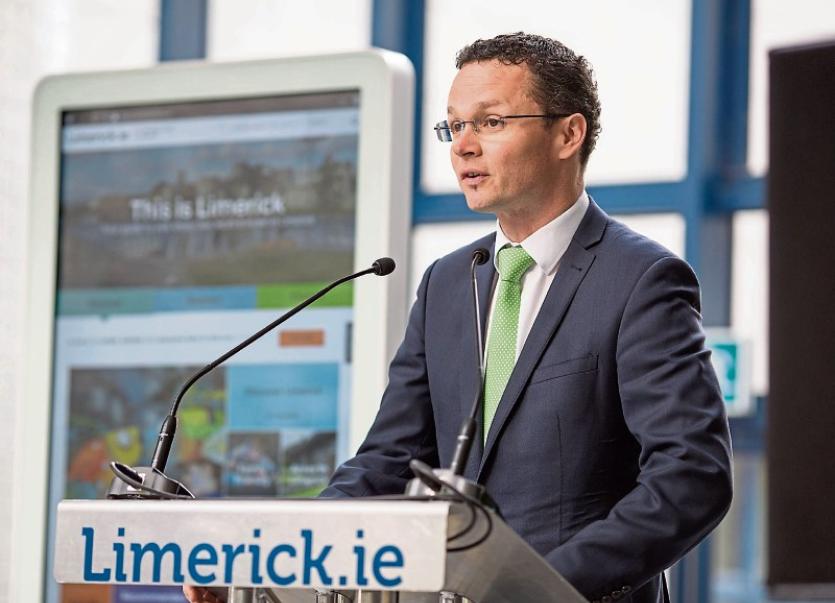 'Limerick is now in a position of strength': Minister of State Patrick O'Donovan on the 2040 plan

THE county’s highest ranking politician and the boss of the Chamber have clashed over Limerick’s strength of voice in government.

While acknowledging the influence of Minister Patrick O’Donovan in advancing the region’s case, Dr Ring said the national package was “a worrying confirmation of the Mid-West’s lack of political influence at national level", adding: “We have begun to experience life after Michael Noonan at the Cabinet table.”

But Mr O’Donovan, a Minister of State at the departments of finance and public expenditure and reform, has rejected the business boss’s claims, saying: “nothing is further from the truth”.

“I am fighting and representing Limerick’s case every day at government and putting us on the national map,” he added.

He said the measures in the Capital Development Plan “show the Mid-West is clearly a priority for Fine Gael in government”.

“Limerick is now in a position of strength to face new challenges and opportunities. You can be sure I will be working constantly to help us achieve new goals and continue the positive development of our home place.”

Key measures in the capital plan include the much-anticipated M20 Limerick to Cork motorway, costing €900m, the upgrade of the N21/N69 Adare to Foynes road, funding for a new €210m Maternity Hospital, a new 96-bed unit at University Hospital Limerick.

Also included is a new prison wing and a new women’s prison for the city.

But there has been criticism of the fact a much hoped-for €15m upgrade to Croom’s ageing Orthopedic hospital did not materialise in the plan, with University Hospitals boss Prof Colette Cowan this week even telling councillors she would have loved to have seen this in the 2040 plan. “But we cannot have everything,” she conceded.

Following the launch of the plan at IT Sligo this Friday, Dr Ring said he has “more clinically assessed” the Limerick aspects to it.

“The conclusion is, unfortunately, that it is going to do very little, if anything to reverse the massive economic imbalance on the island of Ireland. The key objective is to create a new Ireland with opportunity for all, but the reality of what we have seen is that it is going to create a lot more opportunity for those in Dublin and the greater Dublin area in particular than  rest of the country,” he said.

This, he added, is a missed opportunity, saying the plan “turns its back” on the city.

But Mr O’Donovan hit back, saying: “The plan clearly states that three quarters of new growth will be outside Dublin with 50% of the projected population growth planned for our towns, villages and rural areas. Both rural and urban Limerick will benefit from this.”

Dr Ring said despite his disappointment at Ireland 2040 – which he noted contained many projects already previously announced – it would not “stymie” growth.

There were high hopes in the capital plan for some investment at Croom’s hospital, and the fact this has not materialised, has attracted criticism.

He said: “It’s disappointing the government has failed to recognise the importance of the Orthopedic hospital, and didn’t see fir to include it. St John’s Hospital is looking for a new bed ward unit as well, and this was omitted from the programme. It’s disappointing Limerick wasn’t, with all the investment we’ve had in the campus, recognised as a location which should be further developed for elective surgery. The failure to recognise Croom is a part of that.”

Independent councillor Richard O’Donoghue, warned without investment, top surgeons could quit Croom hospital for the private sector.“It’s a building which needs funding to bring it up to a mark to be on the same level as other hospitals. To have it overlooked is like tunnel vision,” he said.

As Prof Cowan was giving a presentation to metropolitan councillors this week and referencing the capital spend, Cllr Collins tweeted: “New UL hospital 96 bed block welcome but not even close to enough. Footfall and admission numbers are huge ...”

Interestingly, the hospital boss both ‘liked’ and ‘retweeted’ the Fianna Fail man’s message.