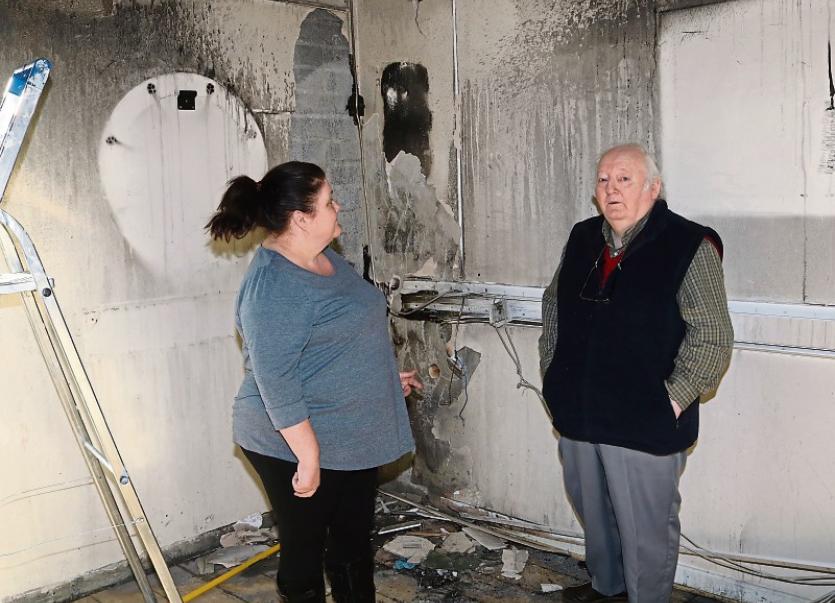 AGAINST all the odds, a northside community centre in Limerick left without power following a fire re-opened to the public just hours after the incident this Tuesday.

There was sadness in Kileely after a fire broke out following an electrical fault in St Munchin’s Community Centre on Monday night, with the manager of the facility Linda Ledger left inconsolable.

Twenty-two people were in the complex on Monday night when the blaze broke out in the centre’s beauty salon, leaving it without power.

But it was business as usual at the centre this Tuesday as electricians worked through the night to restore power, allowing 160 Meals on Wheels to be delivered, and lunch for 200 clients.

Linda thanked this newspaper, after late on Monday night, on our web site, we published news of the dreadful fire.

“People saw your article and kept coming. People came from across the city to help us out. They worked through the night,” she said. “I was devastated at the fire. But it could have been so much worse. Now in the light of day, it’s not as bad as we first feared.”

The beauty salon was completely destroyed by the blaze, and there is also material damage to the reception area.

Since the fire, a number of local companies have offered support, including Walsh Windows, Limerick City Build, the Coonagh branch of Tesco Ireland, and Irish Wire.

“What needs to open is open,” Linda added, “We have turned my office into the beauty room.”

Local Sinn Fein councillor John Costelloe was an eyewitness to the fire last night with his party colleague, Maurice Quinlivan.

He said: “I saw the community at its best last night, all rallying around together. It could have been so much worse. We could have had casualties here. I have to compliment the staff. We wouldn’t be sitting down here today having coffee were it not for them and their quick actions.”

Kieran O’Neill, the chairman of the centre, said there will be a fundraising drive in the coming weeks to try and recoup the thousands of euro damage caused.

He admitted he is loathe to claim this on the centre’s insurance, fearing an increase in his premium.

“The beauty materials were very expensive. But you can replace these. What you cannot replace is lives,” he said.

“The most important thing is everyone is safe.”