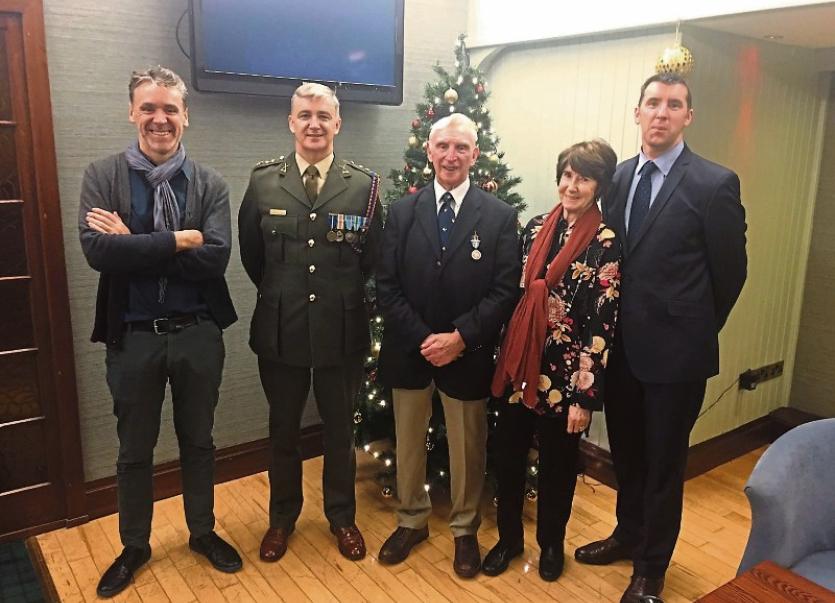 ON THE crown of the Virgin Mary who rests in the Redemptorist Church, gold remnants from Captain Noel Carey’s life of medals are embedded along the statue’s celestial headwear.

Noel, now 82, says this was a gesture carried out by his mother who — along with every family member — had been told that the platoon commander was killed by the Katangese during the notorious Siege of Jadotville in 1961.

Noel, who was awarded a medal of bravery by the Government on December 2, grew up in Fairgreen and was an avid athlete, playing for Pike Rovers, Young Munster and St Patrick’s GAA.

Noel was one of the leading commanders during the September siege when the 150-strong UN Peacekeeping A Company was ambushed by some-2,000 Katangese soldiers.

On the morning of September 13, 1961, the 24-year-old Lieutenant and Commandant Pat Quinlan were tasked with responding to reported riots in the mining town of Jadotville. But upon their arrival, they had instead been lured into a battle against local forces.

For six days, the men — most of whom were 18 — were under siege and ambushed against the town’s edge along the Lufira river.

With no transport of their own, there were two failed attempts to rescue the troops.

During this period, Noel and his platoon took cover from the machine gun- and bomb-armed Fouga Magister jet, mortars and more than 2,000 heavily-equipped mercenaries.

After six days, five injured UN troops and some-300 Katangese fatalities, the Irish men, who now exhausted their ammo, were ordered to put down their weapons. And for six weeks, the A Company was held hostage in a prisoner camp.

Katanga was an affluent breakaway state from the Republic of Congo, rich in copper and uranium, and supported by Belgian troops.

He said that a number of men had been beaten up at the prisoner camp following their transfer.

Noel said that there were fears that they would be killed, following the atrocities in the Niemba ambush, in which nine Irish UN peacekeepers were killed by the Baluba tribe in November in 1961.

“We were fortunate that that didn’t happen. We thought that one of us would be taken out and shot and killed. That was a big worry.

“And communications were so bad at home that messages were sent through the BBC World Service that 40 of the troops had been killed. And my sister Mary, who was in the local convent in St Mary’s, was called out by the headmistress to say that her brother had been killed in the Congo,” said Noel, who now lives with his wife Angela in Blarney.

Noel was engaged to Angela as this incorrect news was being disseminated.

And he said that when he and his troops returned home, safe and unharmed, his wedding vows were all the more special when he married Angela on January 4, 1962 in Limerick.

However, he added, the “biggest injustice” was that his leader Pat Quinlan was not given a hero’s welcome by the Defence Forces, after surrendering to the Katangese.

He said that there was no investigation into the siege and no member of the company was quizzed about what had happened.

“Jadotville was only mentioned because Declan Power wrote a book and that was the first time anybody had ever heard about this situation.”

Declan Power’s book The Siege of Jadotville: The Irish Army’s Forgotten Battle was published in 2005 and was later adapted into a Netflix film in 2016, starring Jamie Dornan who plays Commandant Pat Quinlan.

Pat Quinlan, whose surrender was seen as cowardly at the time, died in 1997 before he was to be officially recognised by the Government in 2005, when Willie O’Dea was Minister for Defence.

Noel, who retired from the army in 1974 after 20 years’ service, described Comdt Quinlan as “a brave man” and said that he was delighted that “a lot of wrongdoing was finally put right. We still didn’t believe it because it had gone through so many loops and processes over the years. It was long overdue, but we could now hold our heads up high and say that our honour has been restored at last after 56 years.”