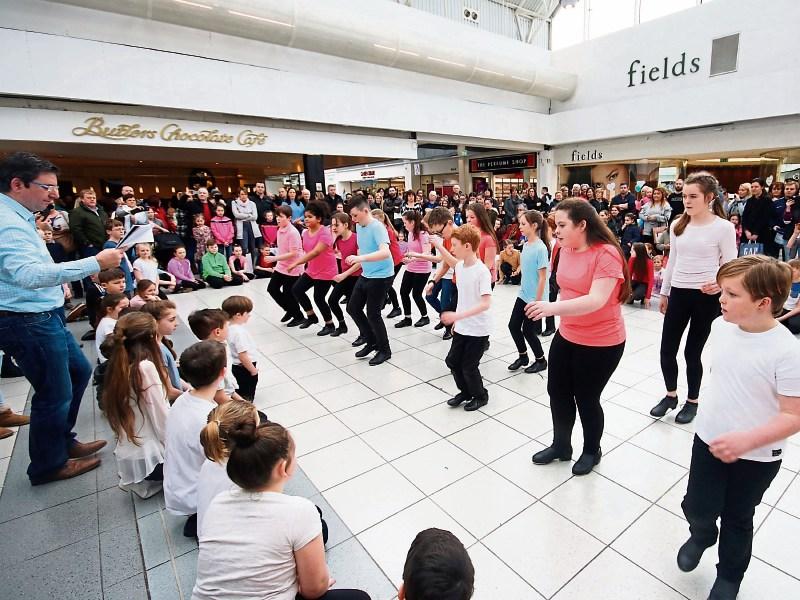 SHOPPERS in the Crescent in Limerick got more than they bargained for thanks to one thoughtful school girl on Saturday.

A total of 74 children sprang into action at 1pm and performed a Sean Nós flash mob.

It was the brainchild of 12-year-old Aimee Walsh, from Caherconlish.

Last September, the sixth year pupil in Bohermore National School turned to her principal, Maria Anketell, and said she wanted to fundraise for Crumlin Children’s Hospital.

“When a child comes up with an idea like that you want to encourage that charitable spirit. I was delighted she came up with the idea. Aimee liked the thought of children collecting for children,” said Ms Anketell.

They then had to come up with a plan.

“We were thinking of the usual things like cake sales. Pat O’Dea from The Teach in Cloverfied teaches dancing in the school. Pat and I were talking one morning.

“When I told him what Aimee had suggested he said ‘why don’t we do a flash mob? and I said ‘brilliant idea’,” said Ms Anketell, who set about contacting the Crescent Shopping Centre and organising the date.

Ms Anketell’s 20 pupils in her class of third, fourth, fifth and sixth children practised hard for the day.

They were joined by over 50 of Mr O’Dea’s dancing students and the Crescent didn’t know what hit it.

“They each had a little slot and performed a Sean Nós flash mob for over 50 minutes. The Crescent was packed. A huge crowd gathered around them. The children got a brilliant reaction.

“I had buckets with Bohermore NS collecting for Crumlin Children’s Hospital and we raised €700 in an hour. Everybody was so generous. Aimee and all the kids in the class are thrilled,” said Ms Anketell, who thanked Mr O’Dea.

“We couldn’t have done it without him and his dancers,” said the principal, who also praised the parents, all her pupils and Aimee.