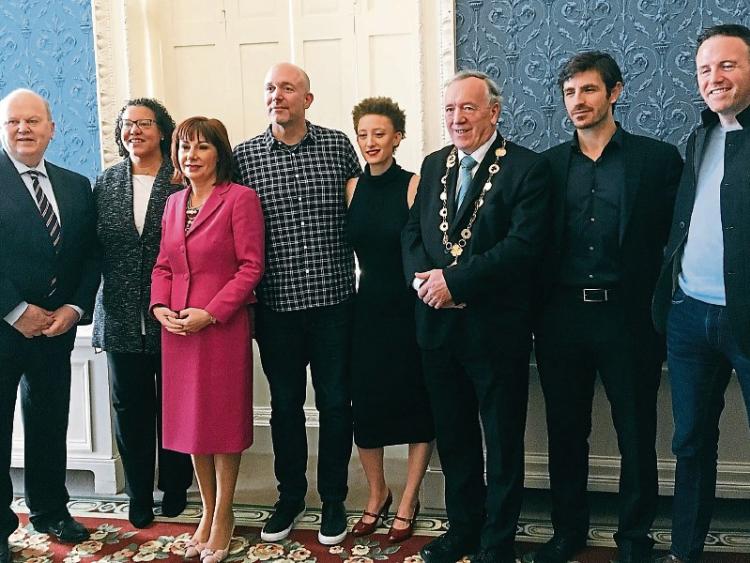 THE MINISTER for Culture, Heritage and Gaeltacht Josepha Madigan has said that the beginning of production for George RR Martin’s Nightflyers in Limerick is “a great cause for celebration”.

Minister Madigan was joined by top producers, television executives, cast and crew at the launch of the new series, which commenced shooting at Troy Studios, in Castletroy, this Monday morning.

The event was held at the Merrion Hotel in the heart of Dublin City this Friday morning.

Based on the 1980 novella by the man who brought the world Game of Thrones, Nightflyers is a sci-fi drama that will be broadcast on Syfy and Netflix after production is complete this August.

Employing 75% Limerick residents, the project is expected to create an economic spin-off of €70m in the local economy.

Nightflyers follows eight maverick scientists and a powerful telepath who embark on an expedition to the edge of our solar system aboard The Nightflyer - a ship with a small tightknit crew and a reclusive captain – in the hope of making contact with alien life. But when terrifying and violent events begin to take place they start to question each other – and surviving the journey proves harder than anyone thought.

Leading actors Eoin Macken – previously of The Night Shift – and Maya Eshet – of Teen Wolf – said that they were delighted to be shooting in Limerick.

Eoin, 34, said that it is particularly special for him to be shooting in Limerick – the birthplace of his late father James and grandfather Matthew.

Matthew Macken, who grew up on the Ennis Road, served as Limerick City manager in the 1950s.

Speaking at the launch, NBC Universal’s executive vice president and general counsel Kimberley Harris said that they were “happy to be doing our first major production in Ireland. The supportive policy environment and skilled local workforce were key factors for this investment and we appreciate the continued support”.

Minister Josepha Madigan said: “I would like to wish Troy Studios and its team here, as well as the cast and crew of Nightflyers, every success in this exciting project and look forward to its airing in due course. For this fledgling studio, which opens its doors to an international production for the first time, it is a great cause for celebration. I wish to congratulate all in Limerick who had the vision to transform the old Dell factory into what is now a major asset for Ireland’s creative industries.”

Limerick City and County Council CEO, Conn Murray described this morning’s launch as a “significant day for Limerick as it realises a vision that few would have dreamed possible.

“It started with talks about transforming the facility we had acquired into the now world-class film hub that has been developed. To have it associated with NBC Universal shows how far we have come and validates our courage in thinking beyond normal boundaries”.

Also welcoming the announcement IDA Ireland CEO Martin Shanahan said, “This is great news for the city of Limerick, not only is today’s announcement NBCU’s first project in Ireland but it is the first production of its kind for Limerick.

“The series has the potential to bring significant employment across a wide range of trades and skills during production, but also further spin-out benefits across the region to support the large crew involved. IDA executives met with senior executives at NBC Universal in New York during the highly competitive site location process so we are delighted with this endorsement for the mid-west region and we wish the team in Limerick every success.”

Netflix will coproduce and have first-run rights to the series outside of the United States.