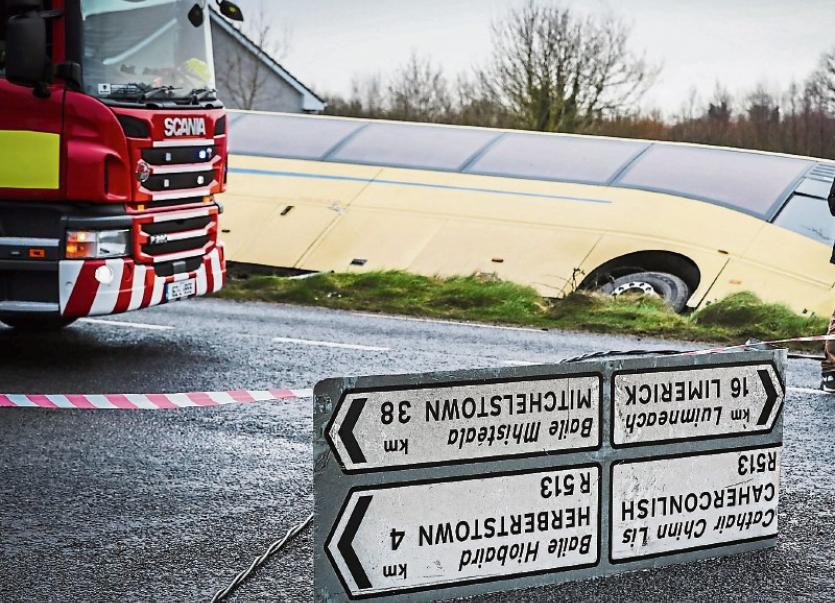 The overturned bus which was carrying approximately 46 students to John the Baptist Community School in Hospital Picture: Keith Wiseman

TERRIFIED teenagers clambered in tears from their school bus after it was involved in a horror crash in County Limerick which left 36 people in hospital.

Shocked parents have described the chaotic scenes that unfolded when they attended the scene of the crash involving the school bus and a car on the main road between Caherconlish and Hospital at approximately 8.30am on Wednesday.

Speaking to the Limerick Leader at the Emergency Department of University Hospital Limerick - where 36 people were assessed and treated for their injuries - parents recalled how “distressed and disorientated” teenagers - all students of John the Baptist Community School in Hospital - climbed in tears from the stricken school bus before gathering in a nearby field.

“I didn't know anything, my wife was in a panic on the phone because she didn't know much and she was on the road going to it herself and when she arrived it was just bedlam. There were kids all over the field and there was no police and no ambulances at that stage," one parent explained.

Carol Wren who lives right beside the crash scene at Connolly's Cross, Caherline, recalled students gathering in her driveway after the crash.

“I looked out the playroom window and I saw all the children inside in the ditch - loads of children screaming and shouting. I saw the bus in the actual ditch. I heard the bang and the electricity went. All the kids went into the driveway or tried to get over the ditch. It was just horrible. I called the ambulances. It was horrific.”

According to a spokesperson for University Hospital Limerick, a total of 36 people presented to the emergency department at UHL in connection with the bus crash and four were admitted. Children and their families were offered counselling while in hospital and follow-up psychiatric support is being arranged through their school.

Of these, just four were admitted and the remainder discharged, a hospital spokesperson said, while two sisters remained in UHL earlier this Thursday.

Emergency services were alerted to the crash at approximately 8.45am and three appliances from the city fire service along with one from Cappamore and Kilmallock “attended as back up as lots of hands were needed to stabilise all the injured casualties to make sure they were all taken care of,” explained James Kearns, Limerick City Fire Service Station Officer.

Eight ambulances also attended along with three patient transfer vehicles and one air ambulance to transfer the injured to hospital.

“On arrival, the bus had been emptied of the pupils, the driver was still in the bus, there was a casualty in the car,” continued Mr Kearns.

"We did a sweep of the area with thermal imaging cameras to make sure nobody was left in the area and made sure everybody was accounted for and moved them off to hospital. The Air Corps were in attendance, they were not required.”

Principal of John the Baptist Secondary School, Noreen Rafferty, who remained at the UHL ED for most of Wednesday to support the injured students said both the bus driver and the woman driving the car did not sustain serious injuries.

“I enquired about both when I was leaving the hospital,” she said on Wednesday night.

Ms Rafferty described all the students travelling on the bus as “heroes”.

“We are very proud of our fifth and sixth years, and the teachers, they took care of the younger students. The emergency services were on the scene very quickly - you couldn’t single out any one student,” said Ms Rafferty who spoke to each of the students travelling on the bus, in the aftermath of the crash.

“We had teachers at the scene and our critical incident team. A number of teachers travelled by ambulance to the hospital with the students. There were 11 ambulances. The hospital had everything in place - it was absolutely unbelievable, the treatment and the care they got, down to even not charging parents for the car park. Some parents drove in the students who weren’t too bad. Most parents were on the scene of the accident. Students are very relieved this evening - there were many tears - the fear of it. The teachers who were travelling from Limerick were on the scene.”

A number of gardai headed up by Sergeant Mike Nash attended the scene along with Pat Donnelly, Limerick U21 hurling manager, who is an inspector with Bus Éireann.

A spokesperson for Bus Eireann confirmed the accident involved a sub-contracted vehicle on one of the company’s school transport services and “our investigation is ongoing”.

The make of the car was almost unrecognisable as it was cut to pieces to extricate the driver who also escaped serious injury.

“I just came down for a look. It is a miracle nobody was killed,” said one local resident.

One father told the Leader that while his son was not physically injured “he will need time to come to terms with what happened".

“He is very very shook up, he won't be right for a while and he is even talking about not wanting to go on the bus anymore. They are going to need counselling and the school will help sort them out. Thankfully he is alright and he just wants to home to get a Chinese," he said.