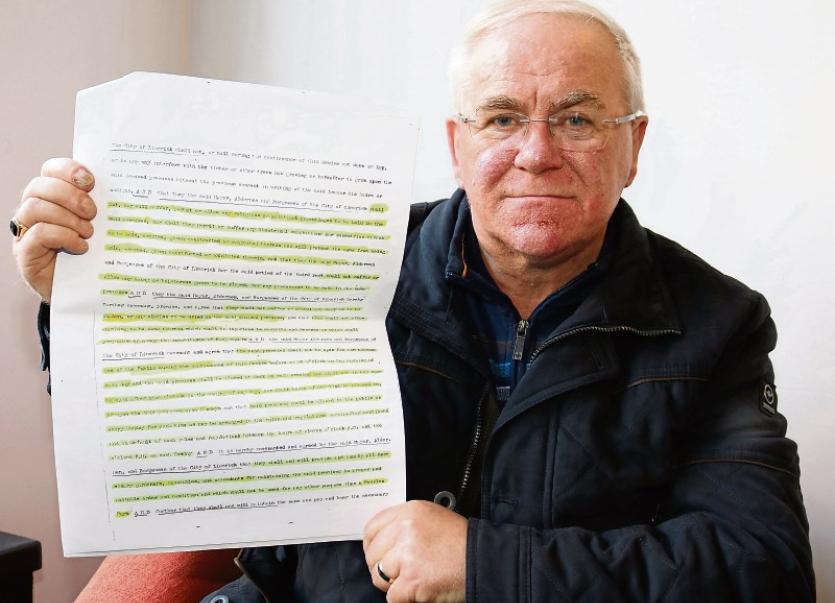 Tadhg Moloney with a copy of the lease, which was signed in 1877 Picture: Adrian Butler

A LIMERICK historian believes the local authority has no right to lease the People’s Park to private companies – and has an ancient treaty to back him up.

Members of the metropolitan district council have opposed plans to close off public parks in their entirety for recent events, most notably the World Barbecue Championship, which saw people pay up to €10 a day to enter.

Tadhg Moloney, from Gouldavoher, says the council should not have allowed this to happen at the Park, pointing to a joint agreement of August 14, 1877, between the Earl of Limerick, the old Limerick Corporation and the Richard Russell Memorial Committee.

“This is a 500 year lease which was given by the Earl and is supposed to be adhered to. The document states: ‘It shall not be used for any other purpose than a People’s Park’. What they are doing to be seems to be totally at odds with the contents of this lease,” he added.

The lease also states that any “religious or political assemblage” should be prohibited in the Park.​

“Nor shall they permit any theatrical exhibitions nor equestrian circuses to be held, erected, given constructed or exhibited,” it adds.

Mr Moloney said he was “appalled” by the closing of the park for the BBQ event.

The historian says despite the council merger in 2014, the lease remains viable.

“This is an amalgamation of two councils. When this was written, the County Council didn't exist. It was the City Council only.”

The council declined to comment, but it has previously outlined that it ‘does not charge a fee’ for events in its public parks.