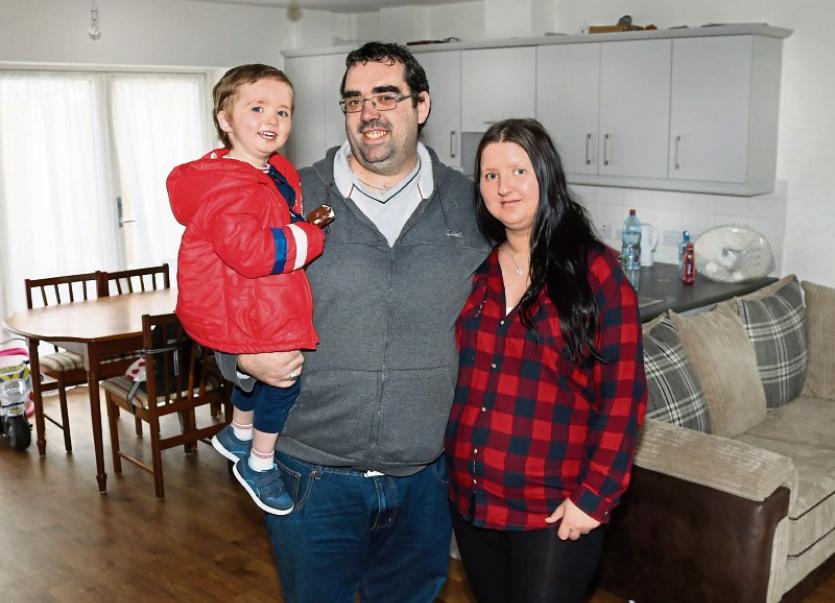 Mark O’Halloran, his partner Victoria Hayes and their two-year-old son Jason were among the first tenants to move into the new Hyde Road apartments Picture: Adrian Butler

A DREAM has come true for a Limerick family who have moved into their new apartment on the Hyde Road.

Twenty new housing units, in a mix of two and three bed houses, are ready for occupation following a “deep refurbishment” by voluntary housing body Cluid.

It comes after almost five years of work to make the formerly dilapidated homes beside Colbert Station fit for habitation once more.

The scheme comprises of seven two-bedroom apartments, nine two-bedroom and four three-bedroom townhouses. It has been delivered by Cluid in partnership with Limerick City and County Council.

As well as the new homes, landscaping works have taken place and a new entrance has been built at the western end of Jackman Park.

Ballynanty man Mark O’Halloran became the first resident in the development when he moved into his home over the weekend with his partner Victoria Hayes and their three children Claire, 9, Kayla, 7, and two-and-a-half year-old Jason.

“When you come from where we were living, the house was damp and mouldy. But now we are in a house which is B1 [energy rating] with all the mod-cons,” Mark, who has been on the housing waiting list for five years, said.

He added his daughter in particular “could not believe” the new apartment.

“She turned around the other day and asked if we were on holidays, and when do we have to go back home? When you hear a child say this, it’s amazing. There is no money which can buy it,” he said.

James O’Halloran (no relation), the development manager at Cluid, added: “It’s great to see all this finished. We have been working on this for the last five to six year. When you see families move in, it makes all the hassles, headaches and preparations worthwhile.”

He praised the council, as well as a number of other groups for their “buy in” to the project.

The opening of these social houses comes on hot on the heels of Housing Minister Eoghan Murphy cutting the ribbon at the Lord Edward Street housing site just a short walk away.