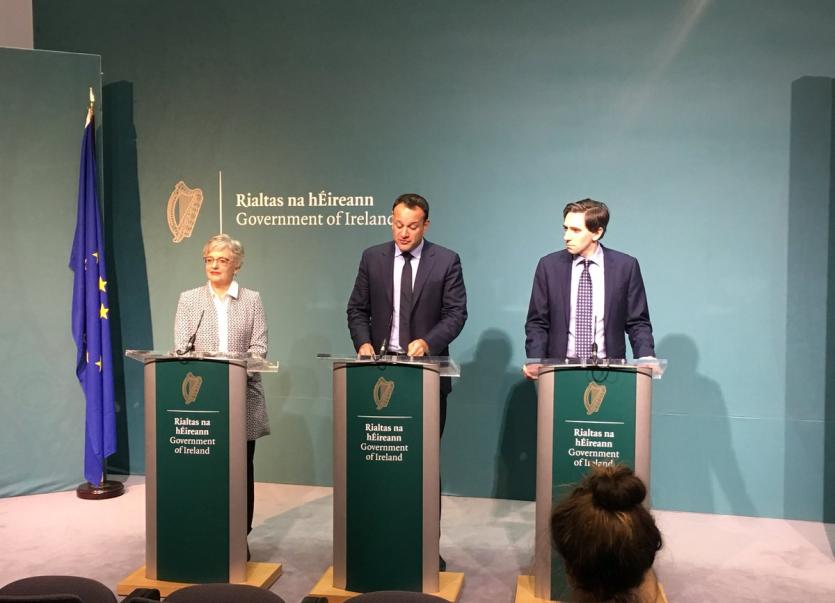 THE Cabinet has this Monday night agreed to hold a referendum on the repeal of the Eighth Amendment of the Constitution, potentially clearing the way for legislation on abortion in Ireland.

Formal approval has been given to the holding of a referendum on the Eighth Amendment, possibly in late May, Taoiseach Leo Varadkar has said.

At a press conference, accompanied by health minister Simon Harris and Minister for Children Katherine Zappone, Mr Varadkar said: "This evening the Cabinet gave formal approval to the holding of a referendum on abortion which will be held in late May or early June this year.

"We know that thousands of Irish women - from every county in Ireland - go abroad for abortions every year. We know that many women are obtaining abortion pills through the post to end their pregnancies. So we have abortion in Ireland, but it is unsafe, unregulated and illegal.

"The question has to be a Yes or No one; do we reform our abortion laws or not? I will advocate for a Yes vote. My own views on abortion have evolved over time. Life experience does that. As Minister for Health I became convinced abortion had no place in the Constitution.

"If the referendum is passed, a doctor-led, safe and legal system for the termination of pregnancy will be introduced. Safe, legal and rare. No longer an article in the Constitution, but rather a private and personal matter for women and doctors.

"In recent weeks many people, mainly men, have spoken about the personal journeys they have been on. We should remember the saddest and loneliest journey is made by Irish women who travel to other countries in their thousands to end their pregnancies. These journeys don’t have to happen," he added.

The Pro Life Campaign said the announcement from government on the Eighth Amendment was "as bad as anyone could have envisaged" in the removal of legal protection from unborn babies and providing for abortion on demand.

Pro Life Campaign spokesperson, Dr Ruth Cullen said: "It is a very sad and serious moment for our country. Tonight, the Government brought forward a proposal that for the first time in our history would withdraw basic human rights from a group of vulnerable defenceless individuals instead of strengthening their constitutional protections. They can't disguise the fact that what’s being proposed is solely about stripping unborn babies of all meaningful legal protections.

"The right to life is an inalienable right. It’s not something that can be conferred or withheld by the State at its pleasure. The Eighth Amendment acknowledges this basic right to life; it doesn’t claim to be its initiator – merely its protector.

"In the coming weeks, it will become clear that the Government’s proposal would lead to abortion on demand if voted for in the referendum. As people come to realise this, I have every confidence they will vote to retain the Eighth Amendment with a renewed commitment to building a more welcoming society for expectant mothers and their unborn babies," she added.

The Abortion Rights Campaign said however that the repeal and enable proposal put forward by government offered "a clear pathway to ensuring realistic abortion access".

"While ARC has always campaigned for repeal simpliciter as advised by the Joint Oireachtas Committee, it appears that the enabling provision proposed by the Government will remove the constitutional barrier to abortion care and allow for more progressive and compassionate healthcare to be provided for all those who can get pregnant," said spokesperson Linda Kavanagh.

"We would still prefer if abortion care was not singled out in our Constitution, but we are willing to support this provision, if worded properly, and heed the legal advice given by the Attorney General.

"However we will be watching the Government very closely and encouraging our members and supporters to do the same in the weeks ahead with regards to the wording of a referendum bill and the proposed legislation. Generations of people have fought too long and too hard for change in our abortion laws, and we will not accept any fudges or half-measures. Modern, accessible and compassionate abortion care must be a guaranteed outcome of the referendum passing – that is non-negotiable.

"We are looking forward to an energetic, compassionate, and respectful referendum campaign. We are repealing the 8th Amendment because we want an Ireland where everyone has access to compassionate, timely, local healthcare," she added.