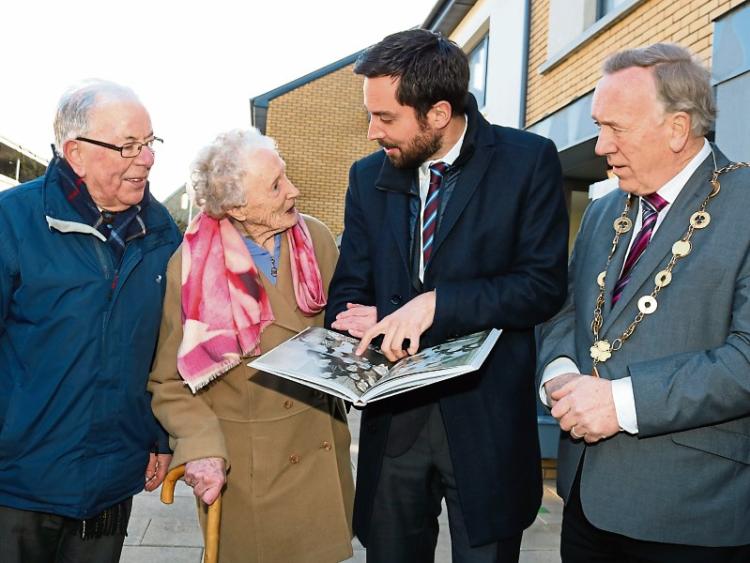 Maura Stapleton, 93, and Noel Tuite, who worked in the old Tait Factory browse a book on its history by Sharon Slater, with Minister Eoghan Murphy and Mayor Stephen Keary PICTURE: ADRIAN BUTLER

ONE of the largest social housing projects in the country has been officially opened by Minister Eoghan Murphy.

Mr Murphy was in Limerick this Monday morning to cut the ribbon at the Lord Edward Street development.

Based at the site of the former Tait clothing factory, 81 new social housing units have been provided with council now starting the filling of these vacancies.

Speaking of the €19m development, Housing Minister Mr Murphy said: “There are many challenges in housing in Ireland but there is also progress on the ground and it is nice to come to an opening like this one at Lord Edward Street and to meet people and families whose lives will be changed for the better by the provision of high quality housing.”

The development also includes a community facility and is right beside the new HSE Primary Care Centre, so this really is a top class example of our work to build not just houses, but to build communities too.

Separately, Mr Murphy was also present at the opening of a new Innovation centre in the former biblical institute in Upper Cecil Street.

Codenamed Engine, the facility is home to entrepreneurs and companies focused on technology and innovation.

WP Engine, which announced an investment here two years ago, is a key tenant.

Also in the centre are Innovate Limerick and Film in Limerick.

And Patrick E Benn, the principal of Clenn Construction, which announced 50 new jobs for Limerick this Monday confirmed his firm would use space to train staff in the facility.

“Engine can be a catalyst for the future economic development of the city and region,” Mr Murphy said.

Mike Cantwell, who heads Innovate Limerick which runs Engine, added: “It will drive and facilitate creativity in a range of sectors including digital skills and film. It will act as a catalyst in regenerating the Georgian Innovation District and reach out to communities in surrounding regeneration areas and beyond.”

For more pictures and reaction, see the Limerick Chronicle and our weekend newspapers.