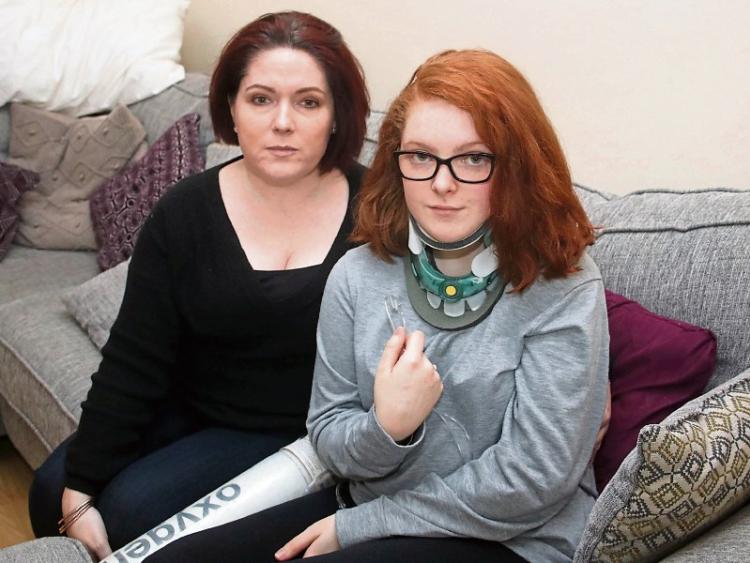 A TEENAGE girl from Limerick who is fighting a debilitating disorder has said she feels “angry and let down” by the HSE that no surgeon will sign off on an initiative to assist her treatment abroad.

Raheen girl Ciara Micks, 16, was diagnosed with Ehlers Danlos Syndrome — a connective tissue disorder — in 2015 and has since been forced to stay at home while undergoing intensive treatment.

Following her diagnosis, Ciara’s health rapidly deteriorated and she later developed serious comorbidities — associated conditions — that have resulted in immense heartbreak for her, her mother Anne and her family.

Her mother, who is also her carer, said Ciara lives with chronic pain, fatigue, insomnia, headaches, fainting, and bladder complications. And “most serious of all” cervical and atlantoaxial instability, which is the dislocation of the skull from the spine.

Her mum said that Ciara recently celebrated her 16th birthday, but due to her condition, “she was cooped up in the house and puking her guts up”.

“It’s not natural for a 16-year-old to be cooped in the house and not be having a normal life,” said Anne.

Ciara has seen experts in London, who specialise in EDS. Her next step in her treatment is to undergo intensive surgery in Spain in March, which will consist of the fusion of her neck. However, when this surgery is done “she will never be able to move her neck again or move her head left or right, or up or down”, her mother explained.

The procedure will also cost in the region of €120,000, half of which has been raised so far. Anne has now set up an online crowdfunding page and those who wish to donate to help fund Ciara’s treatment can do so at www.go fundme.com/CiaraEDS.

“I am limited. I am a carer. I had some savings and my parents helped out and friends and family. I was fundraising prior to that, but was very limited. Any savings that I had were eaten into in the first six months of looking after Ciara and taking her to London,” said Anne.

This is why Anne has sought help from local politicians to assist her in their bid to get Ciara’s treatment through the EU Cross Border Directive. This initiative allows patients to avail of public healthcare within the EU, where services may not be available in Ireland.

But Ciara and Anne have been left angered that no neurosurgeon in the country will sign off on their application for this initiative.

Ciara told the Leader: “I feel angry and let down by the fact that a Neurosurgeon couldn’t be found within the HSE, to sign off on the Cross Border Directive.

“My mum has been doing everything possible to raise the money necessary for me to have the surgery to get some quality of life back. The CBD would help a little towards this.

“The HSE could at least help us towards achieving this, since they can’t provide any treatment for EDS in Ireland as I’ve said before it’s a choice to learn about EDS. It is very difficult to think that people wouldn’t want to help me be somewhat of a normal teenager.”

The HSE said it could not comment on individual cases, but said that all rheumatologists practising in Ireland are “fully trained” in the management of Ehlers Danlos Syndrome.

Despite the barriers, Anne said that Ciara has moments of positivity and hope.

“Ciara amazes me. I don’t think if I was going through the likes that she was going through, that I would be able to have the strength and positivity that she manages to have every day. She will always manage to have a smile on her face.”

Anne is chairperson of an awareness and support group for patients of EDS and Hypermobility Spectrum Disorder, and her aim is to create awareness about the condition.

“It is an invisible condition that is not rare,” she added.