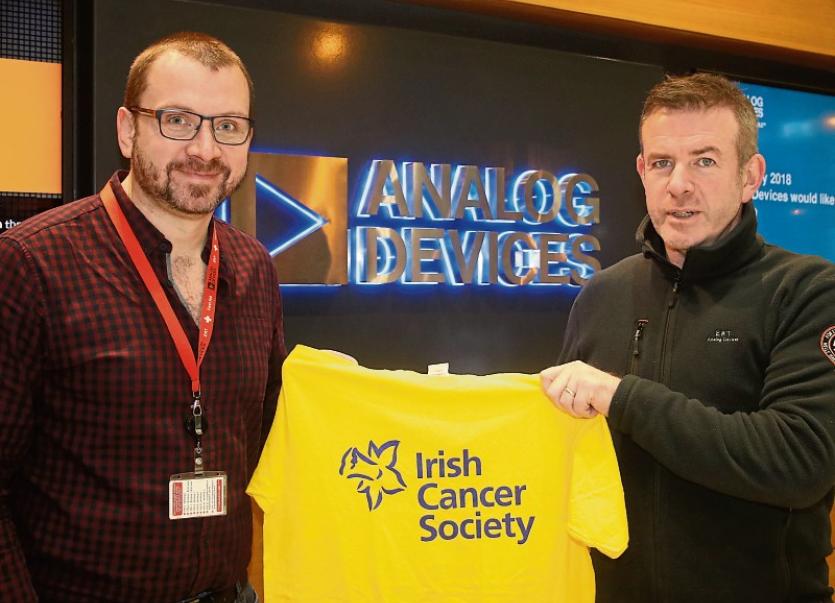 Andrew Nolan and Eoin Boyce who are planning to climb Kilimanjaro later this year for charity | Picture: Michael Cowhey

EVERYONE has been touched in some way by cancer, whether it appears in a friend, family member or indeed, oneself.

But not everyone pledges to climb the highest mountain in Africa, like the two local men hoping to raise funds for the important research invested in by the Irish Cancer Society.

Andy Nolan and Eoin Boyce, both employees at Analog Devices in Raheen, are already training for the trek up Mount Kilimanjaro this October.

At the ages of 38 and 48 respectively, the colleagues have resolved to spend a week going from bottom to top to bottom again, all to raise thousands of euro for cancer research.

“We’ve known each other for over a decade,” said Andy, who is originally from Charleville but now lives in Ballinahinch, Tipperary. “Over the years, we’ve done a small bit of charity like anyone. I did a shave or dye last year, and I raised almost €1,000 just for shaving a bit of hair. So we did a bit of research to see if we could do something a bit more challenging that could raise even more money.”

Andy and Eoin have “no real trekking or climbing experience”, so they decided on Kilimanjaro because while it is still challenging, it’s somewhat manageable compared to many of the other major mountains.

Eoin, who is from Corbally but now living in Meelick, felt the effects of cancer on a deeply personal level when he lost his father around 18 months ago after a battle with the disease.

“Cancer really does affect everyone in some way, shape or form. I don't think there is anyone in Ireland who does not know someone who has suffered from cancer at some point, or has seen the effects that cancer has on someone's family or friends,” said Andy.

The men, who are hoping to raise at least €12,000 via a GoFundMe page, will be guided up the highest freestanding mountain in the world by professionals, but there is still lots of training involved in hiking at such an altitude.

“You can get up much quicker than the amount of time that we’ll do it in, but most of the people who fail to complete it suffer from some form of altitude sickness. So you have to go up bit by bit to acclimatise. We have to do certain types of training to help us to prepare for the altitude,” said Andy.

“It’s 63 km from bottom to top. The amount of time we’ll spend on the move everyday will be between five and seven hours, but on the last day it’ll be 14 hours,” he said.

“On the last day, you rise at midnight in order to make it to the summit for sunrise. And then you break up the treks through the day, like after the first six hours.

“It’s 5,896m above sea level – the world’s highest freestanding mountain. It has a 66 percent summit success rate, with several thousand who don’t make it to the summit. On average, 10 people die per annum climbing Kilimanjaro,” said Andy.

“We will be taking the Machame route, also known as the ‘Whiskey’ route. It’s regarded as the most popular route on Kilimanjaro. Machame’s draw is in its scenic beauty. But the trail is considered quite difficult. It’s very steep, challenging and not for the faint-hearted.”

At the summit, Uhuru Point, the night time temperatures can range between -7 and -29 degrees Celsius. Due to Mount Kilimanjaro's great height, the mountain creates its own weather.

As for the cause, the two men are asking friends to “dig deep” to help stop cancer. “If we can gain momentum, we will try and collect as much as possible,” said Andy. The two point out that “since 2010, the Irish Cancer Society have been able to invest over €20 million into over one hundred innovative research projects”.

This makes the organisation “the largest voluntary funder of cancer research in Ireland”, they say.

Donations can be made by logging on to GoFundMe.com and searching “Eoin & Andy's Kilimanjaro Trek”.