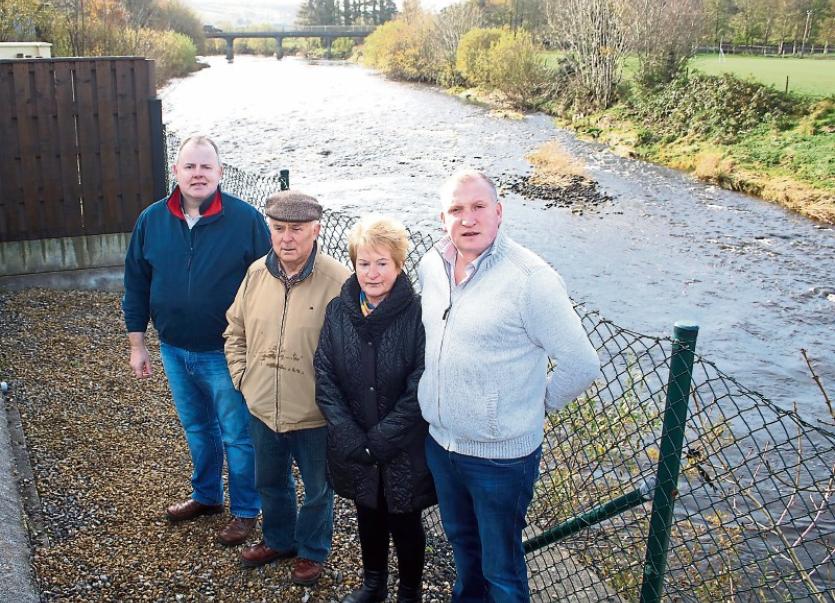 AN action group has now been formed in Abbeyfeale in a bid to find an urgent resolution to the dilemma faced by Eamon and Marie Roche whose home on New Street  is at risk of being swept away by the river Feale.

Despite bad weather on Tuesday night, up to 100 people attended a public meeting in the town where they backed the demand for urgent action and relocation for the Roches and called for an end to passing the parcel of responsibility.

The meeting also voiced serious concern about the wider issue of riverbank erosion in the town which is threatening other properties in New Street.

A deputation will now  seek to meet Minister of State, Patrick O’Donovan in a bid to exert pressure on the government to make funds available to resolve the situation. A proposal to travel to Dublin to protest at the OPW office is also under consideration.

“Until such time as the OPW takes responsibility, this is going to be left in limbo,” declared Cllr Liam Galvin FG following Tuesday’s meeting.  Immediate action was needed to safeguard  two properties, the Roches home and their neighbours’, the Twomeys, he said. “They could be saved and I don’t think it will cost €500,000,” he continued.

But work also needed to be done on the riverbank to ensure other property isn’t adversely affected, he argued. “A survey needs to be done of the river from the Town Park as far as the Mart and a plan drawn up,” he said, warning that unless and until the OPW gets involved, the issue would be left “in limbo”.

“The solution is the money has to be found nationally,” Cllr Michael Collins, FF, chairman of the Newcastle West Municipal District said.

“A project of that scale is normally funded through central funds and it has to be found.”

Last week, at a Municipal District meeting, councillors agreed that relocation was the only solution for the Roches and asked the OPW to include the Roches under its relocation scheme.

However, in a reply to their request, the OPW  confirmed that the Roches do not qualify under the terms of its relocation scheme as no water had actually entered the house.

What this will mean remains unclear but the Roches and the councillors are very clear about what it must not mean.

“There is a difference between rehousing and relocation,” Marie Roche told the Limerick Leader. “We would not accept social housing,” she added, pointing out that they  had worked all their lives to buy what was supposed to be their retirement home.

Mr Lehane stressed to the Limerick Leader that the Council had raised the wider issue of erosion in Abbeyfeale when it met with OPW officials and with Minister Kevin Boxer Moran in November.

“The statutory responsibility and onus rest with the OPW. They are the specialist agency with responsibility for drainage and flooding,” he said. “We asked them to look at the river in Abbeyfeale.”

However, he continued, the core issue in relation to the Roche home was “the failure of the gabion wall which is in private ownership and causing distress to the Roches.”

It emerged at last week’s district meeting that the wall at the rear of the Roche house which now damaged by the river, is not owned by them.