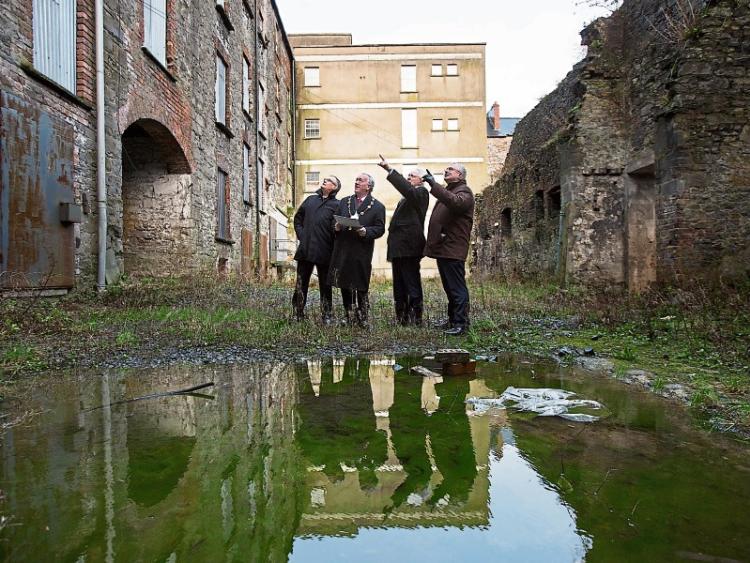 LIMERICK council CEO Conn Murray has said he expects to have “positive announcements” to make on residential developments in the city centre in the coming months.

And he indicated that sites around the Patrick Street development could be used for accommodation purposes.

It comes as the final piece in the jigsaw for the multi-million euro redevelopment of Project Opera was put in place this Wednesday, with the Council signing a loan deal with the Council of Europe bank for €85m.

Together with a loan of the same amount of money from the European Investment Bank, and a further €30m – the source of which is commercially sensitive – it means the development, which will see three high-rise office blocks and limited commercial space can now power ahead.

“Make no mistake about it, we are beyond the point of no return,” Mr Murray told those gathered at the event, including the governor of the Paris-based lender, Dr Rolf Wenzel.

A transformational project for Limerick, the fully developed site will be capable of employing up to 3,000 people across an area of 555,000 square feet. It will be progressed by Limerick Twenty Thirty, a strategic development vehicle, operating at arm’s length from the local authority.

This Wednesday, the Council said that in the evening time, the site will be transformed into a “bustling destination complete with restaurants, bars and open entertainment spaces” – perhaps putting to rest fears the area could become a ‘dead zone’ post-6pm.

But amid a housing crisis, and private rents spiralling out of control, a lot of the discussion around Project Opera has been focused on why no housing units have been included – especially with initial proposals for the scheme showing 161 apartments.

The fact that the Council of Europe Bank is, as its governor Dr Wenzel said, “the only development bank in Europe with an exclusively social mandate, [striving] to strengthen social cohesion in our member countries,” raises further questions.

Addressing the audience, Mr Murray tackled the issue of housing head on.

“Residential has, indeed, been very much part of the vernacular of late when it comes to the Opera site,” he acknowledged.

“We are, of course, listening to those who are demanding that residential be part of the mix of uses on the site. But this demand must not only be looked at in the context of the suitability of the site, based on the Environmental Impact Assessment I have requested to be prepared, but also in the context of the wider opportunities that adjacent lands to the Opera site can deliver.

"The Opera site never was, nor will be the answer to all our problems, but simply another step towards the type of Limerick set out in our 2030 vision.”

Asked by the Limerick Leader about private housing, Mr Murray pointed out over 3,000 homes had been given the go-ahead, the majority in the metropolitan area.

“There may be issues at developer level. How we’re answering that is the Mungret site. There are 200 acres there, and the potential delivery of 850 units, and that will be in accordance with the same timeline as the delivery of the Opera and other major sites out there,” he said.

Project Opera is the corner-stone of the Limerick Twenty Thirty programme, and is the largest public scheme to take place in the city in decades.

Meanwhile, Denis Brosnan, who chairs the Twenty Thirty company, and has worked to develop the city’s economy since 2009, said the closure of Dell’s manufacturing plant then was “probably the best thing to happen to Limerick”.

“Without that, the government of the day would not have been shocked into seeing Limerick had hit an all time low and something needed to be done,” he added.

Patrick O’Donovan, who is in the government of this day, said the whole region has been through a “phoenix-style resurrection”.

”We don’t need any nit-picking or quasi-negativity on anything like this. This is a remarkable event for Limerick, and it needs to be seen in this context,” the Junior Finance Minister said.

Limerick Twenty Thirty is also developing two other sites in the city: Gardens International at Henry Street, and the former Cleeve’s factory on the North Circular Road.