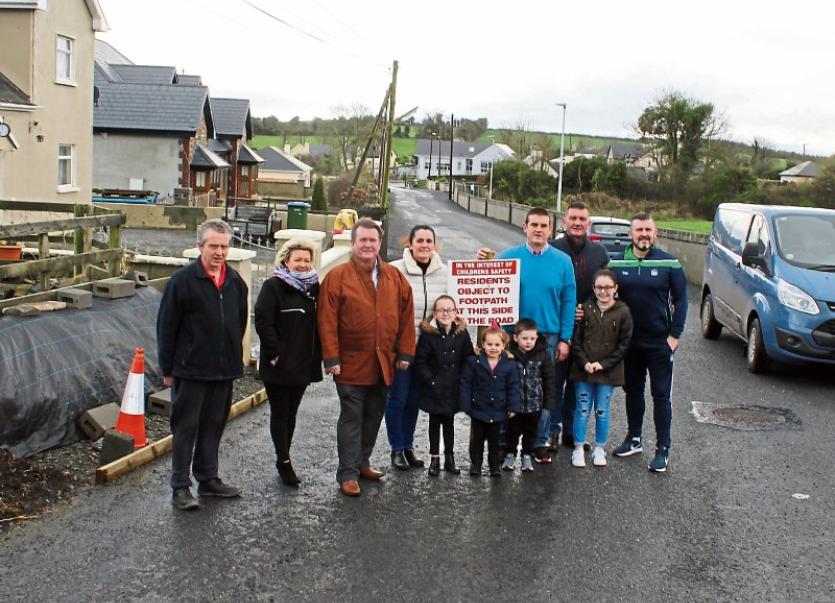 Tim Long, Mary O’Neill, Richard Harty, Tracy Harty, Billy Harty, Tim Harty and Michael Harty argue the footpath should be on the left so children from houses don’t have to cross the road

RESIDENTS of a County Limerick village are so anxious that a footpath be built to prevent a “child from being killed” they are willing to do it themselves.

A number of locals in Nicker have been in dispute with the council since last summer over which side of the road a path will go on. Protest signs were erected on the road on a steep hill and bend to Nicker school.

As there was a big cost difference between which side of the road it would go, plans were shelved. Last September, three brothers approached the council and offered to build it themselves. William, Richard and Tim Harty all have years of experience in the construction industry.

“Is it going to take a child running across the road to be hit and killed to get an answer? Kids don’t see any danger. Cars come flying down that hill,” said William.

The brothers say they will carry out the labour and have others signed up for the job. Tim says a 400 metre path could be laid for €16,000.

“We can do it over four Saturdays – no problem. We have it all priced. A local contractor has agreed to cover insurance. The council can oversee the job. All we want from the council is concrete and materials. It will save the taxpayer tens of thousands. All we want is an answer,” said Tim.

William Harty said: “We want the path to continue down from where it ends. Bring it all the way down and put a pedestrian crossing at the school so they can cross there safely. What is the point in kids having to cross the road to get on the footpath?

If an answer isn’t forthcoming soon William says the protest signs will be going back up.

“Last year there were works undertaken, and completed, between Nicker school and the village. These included public lighting, surface water drainage, road reconstruction and road surface dressing. The total cost of these work amounted to around €70,000. The overall works in 2016 and 2017 were made possible thanks to councillors allocating money from the general municipal allocation, as well as funds provided from the general maintenance and road grants budgets.

“The works between Nicker school and the village were helped enormously after a wall along the route was constructed by the local community council and Ballyhoura between 2014 and 2016, assisted by Limerick City and County Council,” said the spokesperson. In relation to the construction of a footpath on the Harty’s side of the road they estimate it would cost around €45,000.

“An additional €30,000 would be required for a pedestrian crossing and a further annual cost for ongoing treatment of the ditch and hedgerow. All works carried out on a public road must adhere to proper procurement procedures as well as stringent health and safety regulations. There also has to be significant public liability insurance. All as laid down by law. It is important to point out that a school and three houses are located on the side of the road where the works have already been completed compared to four houses on the opposite side. The works already completed in conjunction with the community and development company have made the route between Nicker and the school a lot safer for pedestrians and other road users.”