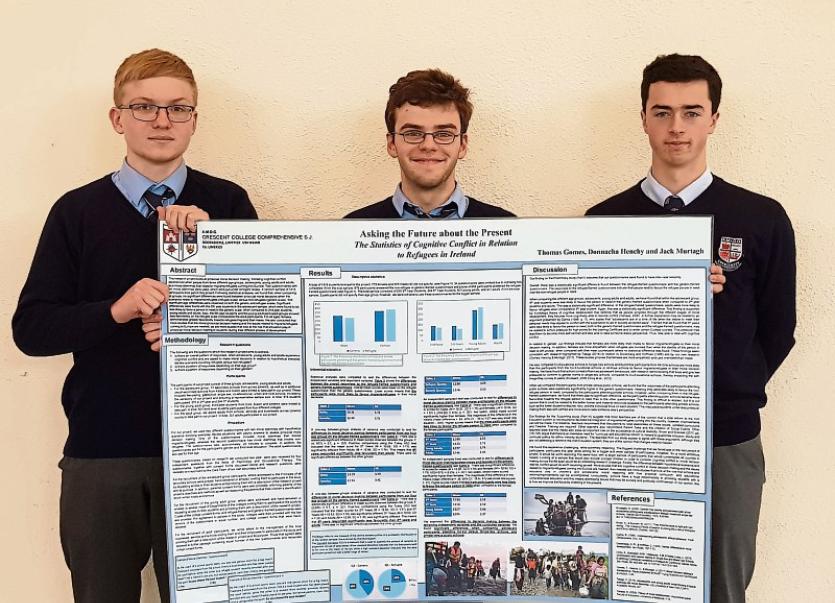 IT WAS Benjamin Disraeli who said, “There are three kinds of lies: lies, damned lies, and statistics” but he would have changed his mind if he met Donnacha Henchy, Thomas Gomes and Jack Murtagh.

The three Crescent College Comprehensive boys have entered the BT Young Scientist & Technology Exhibition for the second year in a row.

Jack, from Dooradoyle, says the project by himself, Thomas, Ballyneety, and Donnacha, Kilmallock, is a continuation of the work they completed in 2017.

“The project, entitled Moral Decision Making in Adolescence, looked at how second and fifth year students across seven different secondary schools in Limerick felt about the refugee crisis, and if any bias against refugees existed among adolescents.

"We had been inspired to look into this matter through our exposure to the situation with the news and at school, feeling it was a very current issue. We combined it with a desire among us to do research on the moral development in adolescents,” explained Jack.

They expanded and continued their research in their new project: Asking the Future about the Present – The Statistics of Cognitive Conflict in Relation to Refugees in Ireland. It aims to look at the same issue, but has also expanded to include participants across the nation, as well as college students and working adults.

“We used statistical analysis to calculate, on average, how people answered the questionnaires, and thus compared the average reaction for both.

“In addition, after the moral dilemmas, there was a brief section, identical on both papers, enquiring about the demographics of the participants – gender, age group, etc.

“Looking at our results this year, we found that overall, there was a statistically significant difference in the average answers across the two questionnaires, showing that people were significantly more favourable towards the person in the refugee questionnaire, when compared to the control questionnaire.

These are only a few of the results they have concluded from their research and only a brief explanation of the project. They invite anyone interested to see their stand in the RDS at the exhibition, which runs until Saturday.