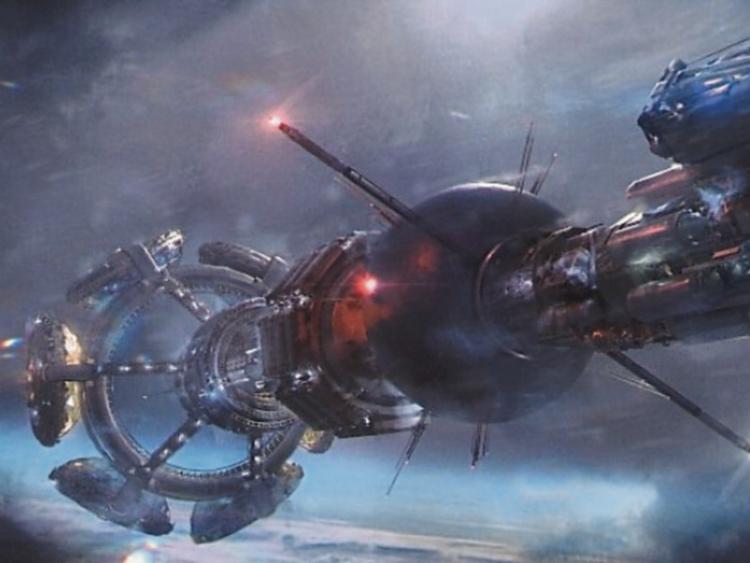 Concept art for The Nightflyer ship, shared by George RR Martin on his blog

AMERICAN cable television channel SYFY has confirmed a 'series order' for George RR Martin’s Nightflyers, which will be shot at Limerick’s Troy Studios.

In a statement this Thursday night, SYFY announced a series pickup for the big budget sci-fi show, which is based on the Game of Thrones author’s novella and the 1987 film of the same name.

As revealed by the Limerick Leader some weeks ago, Nightflyers has been commissioned for a full series and will be shown on Netflix outside the US.

It will star Gretchen Mol of Boardwalk Empire fame, while a star studded team that have worked on shows such as The Blacklist, Suits and Orange is the New Black will be involved in its production.

It is to be shot at Limerick’s Troy Studios, with filming to start this month or next until around the end of August, employing a large number of people.

Mike Cantwell of Innovate Limerick, Limerick City and County Council's investment arm that was crucial to finalising the Troy deal, told the Leader that “we believe it is the biggest production that was ever done in the Republic”.

There are currently six workshops in use at Troy, with 50 construction craftsmen and women from Limerick and the wider region working there, while a host of local suppliers have also been engaged by the production company.

As well as the craftspeople working on the production, it is also sourcing a huge amount of raw material locally, from local suppliers, while about 14 engineering businesses in the Mid-West are also working directly with the production company, Mr Cantwell said.

“From the local authority, the reason for getting involved in it in the first place was because for the potential for film investment in the region and that is coming through now and creating jobs for people in the region,” he explained.

SYFY said the series will be produced by Universal Cable Productions, with Netflix to co-produce and have first-run rights to the series outside of the US.

It said: “The series, produced in Ireland, is moving forward with the support of the Government of Ireland, through the Minister for Culture, Heritage and Gaeltacht and the Irish Film Board.”

It follows eight maverick scientists and a powerful telepath who embark on an expedition to the edge of our solar system aboard The Nightflyer - a ship with a small tightknit crew and a reclusive captain -- in the hope of making contact with alien life. But when terrifying and violent events begin to take place they start to question each other -- and surviving the journey proves harder than anyone thought.

Jeff Buhler has written the  adaptation for television and will executive produce alongside Daniel Cerone, who will also serve as showrunner.

Andrew McCarthy (Orange is the New Black) will be a producer-director on the project. Mike Cahill (I Origin) will direct the pilot.

Conn Murray, CEO of Limerick City and County Council, has estimated that Troy could result in a €70m spin-off for the local economy, creating hundreds of jobs.

Troy, run by Siún Ní Raghallaigh, Ossie Kilkenny and John Kelleher, has so far maintained a discreet media profile but Michelle Brassil, who also works with the studio, said that “in providing world class film studio infrastructure, Troy Studios will be the enabler for incoming productions that will seek to employ local production crews, trained to a very high standard”.