Vigilante group threatens to 'deliver justice' to criminals in Limerick 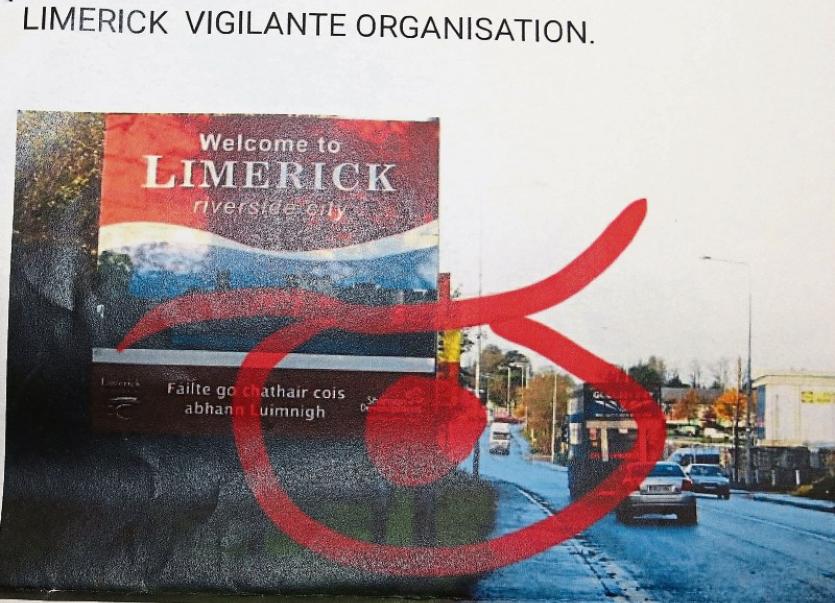 LIMERICK'S most senior garda is urging the public not to turn to a vigilante group that has promised to “deliver justice to those deserving, with whatever means is necessary.”

Styling itself the Limerick Vigilante Organisation, the group has threatened to take the law into its own hands in a letter which was posted to Limerick Leader editor, Eugene Phelan.

In the unsigned typed letter, which was received over Christmas, the group says: “Our beloved Limerick City has come under threat to a plague for the last number of years. This disease has rapidly spread under our very noses with little been done about it.”

The letter, which was typed on a number of A4 pages, also contains a photograph of a “Welcome to Limerick” road sign with what appears to be some sort of logo, possibly of an eye, overlaid on it.

A copy of the letter has been handed over to gardai and Chief Superintendent David Sheahan has said he cannot condone the actions which are being proposed or anybody taking the law into their own hands.

”The bottom line for me is there is only one law of the land and we have been asked to enforce that law,” he told the Limerick Leader, adding that there are various avenues for those who have concerns to follow.

“People can call to any garda station and we will discuss it (their concerns) with them and there are public representatives out there as well that they can discuss things with them and they will bring it to our attention,” he said.

In addition to criticising An Garda Siochana, the letter which was stamped at the Cork Mails Centre on December 22, 2017, also criticises a number of other agencies, including the Courts and members of the judiciary.

“Poor sentencing in the courts with lack of jail time and no juvenial (sic) detention facilities make these types of people reoffend constantly,” it reads.

The group claims its membership is growing and that its intelligence has advanced in recent times.

“This is no joke, no hoax as you will notice the presence of our organisation in times to come. We will take matters into our own hands,” the letter states.