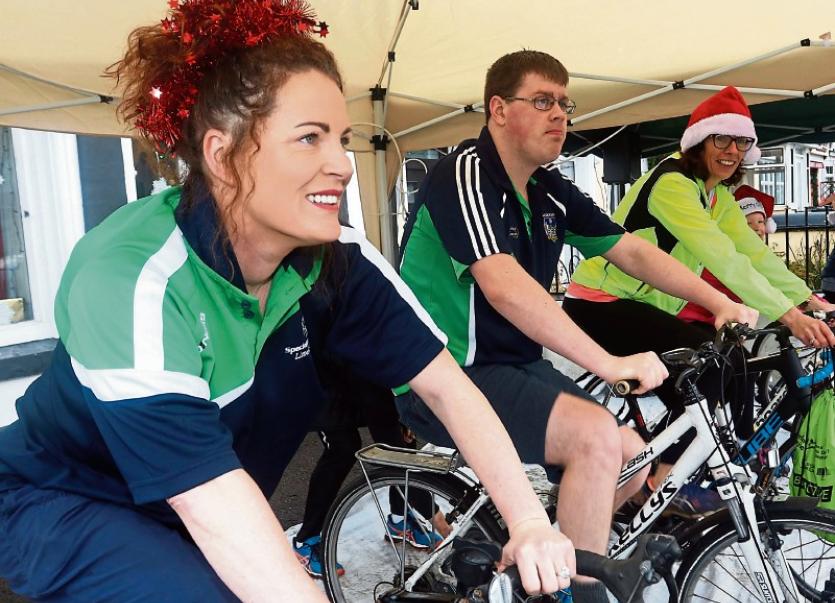 Nicola and Peter Meskall, and Siobhan O'Neill, enjoying the Ahane Camogie Club 24-hour spinathon to raise money for the club, and Care of the Elderly Picture: Brendan Gleeson

THEY like being active in Castleconnell at Christmas – if it isn’t a swim it’s a spinathon!

On Saturday, December 23, Ahane Camogie Club players, members and supporters embarked on a 24-hour cycle but they didn’t move much. Six stationary bikes were set up outside the Shannon Inn.

From noon they pedalled to the metal to raise money for the club and the parish’s Care of the Aged.

Chairperson of Ahane Camogie Club, Tony Kenny said there was a great atmosphere in the village as locals and those home for Christmas popped in to give moral and financial support. Over 100 participants got in the saddle and they didn’t have to count calories over Christmas!

“It went very well. It was a fantastic day.  A lot of people commented to say that it was great to see something happening on the festive weekend,” said Tony.  Limerick’s Mr Motivator Richie Clifford got the ball rolling and then players took over.

Some of their senior hurlers, including Niall and Ollie Moran cycled for a couple of hours. And former Munster and Irish rugby star Marcus Horan also helped them get over the 24 hour line. The church choir kept all in good spirits by singing carols.

“The six bikes were going more or less all the time from 12pm to midnight and then from there to 3am there were two bikes going. From three in the morning until noon the six bikes were going as well,” said Tony, who credits George Lee with coming up with the idea. George also put his legs where his mouth is by pedalling at 5am. While all the money hasn’t been counted yet Tony hopes that a sum of around €3,000 will be raised for the club and Care of the Aged, who came down to cheer them on.

Meanwhile, the annual Bog Cup in memory of the late Shane Lee takes place in Aisling Annacotty on Saturday, December 30 from 10.30am to 2.30pm.