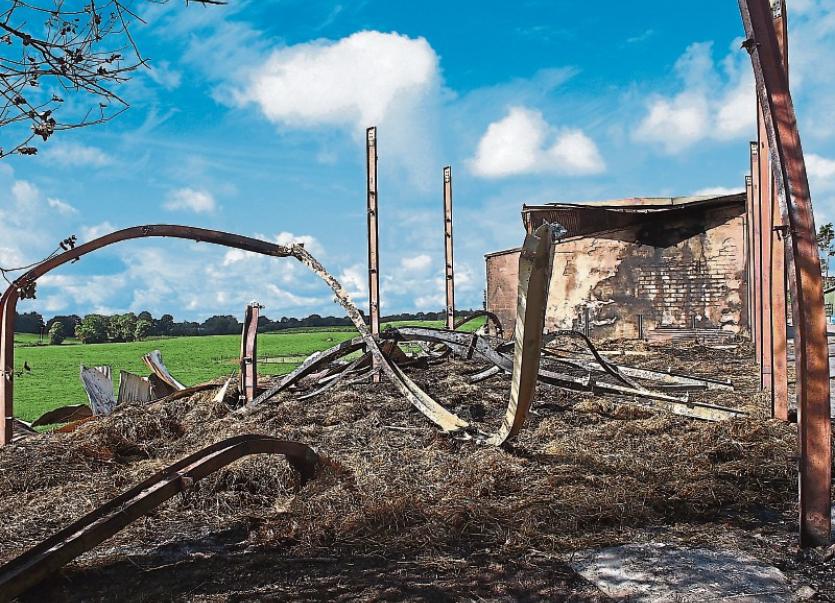 A YOUNG man who caused more than €50,000 worth of damage after setting a bale of hay on fire will has brought a lot of shame to his family, a Limerick court has heard.

Seamus McCarthy, aged 22, who has an address at Knocknasna, Abbeyfeale has pleaded guilty to a single charge of arson relating to an incident at Copeswood Dairy Farm, Shannon Grove Pallaskenry during the early hours of September 24, 2014.

The hay barn, which was located in the dairy yard at Pallaskenry Agricultural College, was completely destroyed in the blaze.

During a sentencing hearing before Christmas, Garda Aidan Haddock said the alarm was raised at around 4am and that the defendant was subsequently identified as a suspect by gardai.

Limerick Circuit Court was told the defendant who was a student at the agricultural college at the time had been drinking at a pub in the village earlier in the night before returning to the dormitory he was drinking with other students.

While the hay barn was completely destroyed, no animals were injured and no machinery was damaged as a result of the fire.

Garda Haddock said McCarthy, who has no previous convictions, made admissions in relation to the fire following his arrest sometime after the fire.

He said he told gardai he had been messing with a cigarette lighter and that he had panicked and returned to the dormitory when a bale of hay caught fire and “took off”.

The defendant, who was very drunk on the night,  told gardai he had gotten an idea to burn the hay shed but that he didn’t think it would blow up.

The shed, the court heard, was used to store a variety of different bales and it was accepted the defendant had not used any form of accelerant to start the fire.

However, there was insurance in place and the shed has since been rebuilt.

Erin O’Hagan BL, instructed by solicitor John Lynch, said there was no risk of people being injured as a result of her client’s actions.

She said her client cooperated with gardai, made full admissions and identified himself on CCTV during garda interviews.

Ms O’Hagan said her client left the agricultural college a short time after the incident and that he hasn't’s returned to education since.

She said it was his first time away from home and that alcohol was a factor on the night.

“There was no malicious aspect to it, it was a foolish decision, it was a stupid, stupid thing to do,” she said describing what happened as a “showing off experiment that got completely out of hand”.

Judge Tom O’Donnell was told McCarthy is engaging with the Probation Service and that he is actively seeking employment.

However, given the rural location where he and his mother live she said his employment prospects are not good and that he plans to move to the UK “to get up and running” in the near future..

Ms O’Hagan said with the help of his mother, her client had raised €2,000 in compensation as a ‘token gesture’

Judge O’Donnell noted this and he directed the money be paid over the agricultural college. He will finalise the matter on March 30, next.